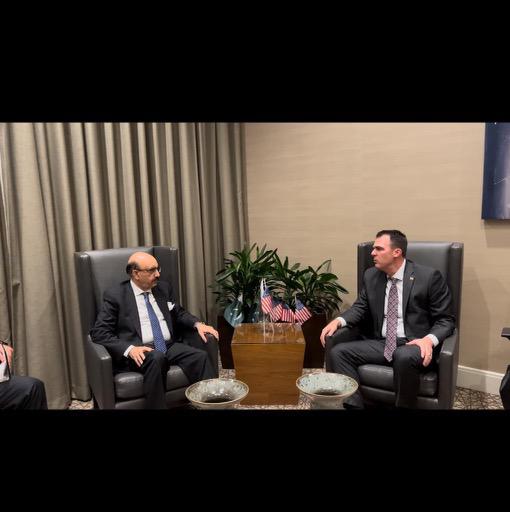 OKLAHOMA: Pak Ambassador to the United States Ambassador Masood Khan has said that $70 million bilateral trade between Oklahoma and Pakistan was far below the actual potential and carried a huge scope to be enhanced manifolds through better networking and greater interaction of the private sector of the two sides.

Addressing as a keynote speaker during Oklahoma City Annual Banquet, Masood Khan said that the vision of Governor Kevin Stitt and the priorities of the Government of Pakistan made the two sides natural allies in the economic sphere.

The event was addressed   by Governor Oklahoma John Kevin Stitt and attended by US officials, businessmen, entrepreneurs, professionals and a large number of Pakistani diaspora including members of Association of Pakistani Descent Physicians of North America.

Ambassador Khan appreciated the leadership of  Governor Stitt who is known for his vision to transform the state and made the State of Oklahoma  top ten in critical categories of good governance, job growth, infrastructure and education.

The Ambassador paid glowing tribute to the services of nearly 300 members of Association of Pakistani Descent Physicians of North America (APPNA) based in Oklahoma who were making Pakistan proud with their successes in the United States.

Urging Oklahoma’s business community and the diaspora, the Ambassador highlighted healthcare, health-tech, medical transcription and billing, diagnostics and pharmaceuticals as the critical areas where there existed huge opportunities for making timely and productive investment.

The Ambassador observed that the recent floods in Pakistan and the generous assistance not only by the US administration but by the US citizens had once again proved the inherent strengths of Pak-US partnership. He said the reconstruction and rehabilitation phase of post-flood era has opened up new vistas  for support and investment from the business community of Oklahoma to reap the benefits of not only a market of over 220 people but also a vast neighborhood comprising of East and Central Asia, Middle East and Africa.

Governor Stitt appreciated the role and contributions of Pakistani doctors, physicians and other professionals towards socio-economic development of the state of Oklahoma.

The Ambassador invited Governor Stitt to visit Pakistan at his convenience which he graciously accepted.