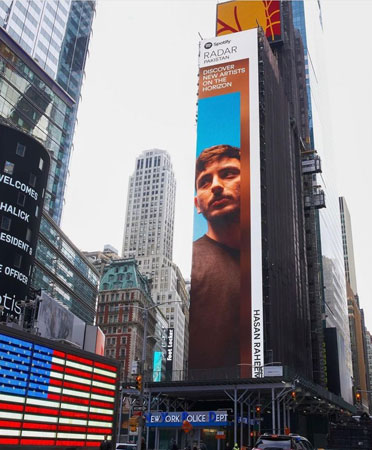 Famous singer and songwriter, Hasan Raheem has become the first Pakistani male artist to make it to the gigantic digital billboard on Times Square in New York. On Friday, Spotify Pakistan shared on its Instagram account a photo showing the Faltu Pyar singer plastered along the length of the side of the Times Square Tower. The caption read, “Pakistan’s very first RADAR artist, @Hasan_Raheem, makes his Times Square debut.”

Raheem is the first Pakistani singer who was featured in Spotify’s RADAR programme.

Spotify’s RADAR programme connects people to rising artists from across the globe. Last week, Spotify released a short documentary on Hasan Raheem in which he discussed his musical journey.

In his RADAR Pakistan documentary, he talked briefly about his musical journey, which he pursued during his Medical degree. The documentary also gave his fans a deep insight Hasan Raheem’s personal life as he discussed his family’s ‘support system’ and showed his music studio.

Hasan belongs to the generation of artists who have gained prominence first on YouTube becoming a household name before making it to mainstream airwaves.

His infectious singles on YouTube such as Khona Tha and Joona featuring Abdullah Kasumbi with campy videos shot around Karachi grew a fast fan following.

He continued to go from strength to strength with collaborations with domestic musical geniuses including Talal Qureshi and Kasumbi powering his particular crooning. It earned him a call up to Coke Studio season 14 where his song Peechay Hutt alongside Justin Bibies and Talal Qureshi powering the base beat became a smash hit.

He followed that up with arguably one of the hits of the year with Faltu Pyar with Natasha Noorani. Talal Qureshi’s music again paying dividends.