* According to Gladwell, The Tipping Point is the moment of critical mass, the threshold and the boiling point 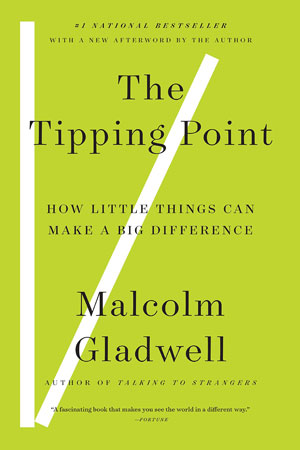 Malcolm Gladwell revealed to the readers how trends change opinion and reshape social consciousness regarding a person, object, or anything for that matter.

It has been 22 years since he published “The Tipping Point: How Little Things Can Make a Big Difference”, but the book’s content remains relevant today.

According to Gladwell, the Tipping Point is the moment of critical mass, the threshold and the boiling point. He wrote the book in a conversational style that was blended with his opinion and facts – both merging to create a congenial atmosphere for learning for the readers. Through the eight chapters, Gladwell takes the readers on a journey of self-exploration and enlightenment. He presents examples of how companies uplifted their brand and changed social consciousness.

When launched in 2000, The Tipping Point became a global phenomenon because of Gladwell’s insights and the rules he presented. He used the science behind epidemics to show how small actions directed at the right audience, with the correct intention, implemented at the accurate time manifest a ‘tipping point’ for products. This causes a flood of demand. He cites the example of Hush Puppies, a shoe brand, that was losing traction with consumers in the early 1990s. However, the brand once again appeared in mainstream advertising when fashion-forward youth began wearing it in their neighbourhood. To achieve a tipping point for its brand, Gladwell presented three laws: The Law of the Few, The Stickiness Factor, and The Power of Context. Gladwell mentioned about three kinds of people who share and spread ideas like a disease.

These are Connectors, Mavens, and Salesmen. Connectors are well-connected with like-minded people or those related to their industry. Mavens are actively collecting information. They acquire ample information regarding their field of interest and emerge as experts. Salesmen guide you about the ‘why’ of pursuing an idea. Simply put, Connectors know people, Mavens know information, and Salesmen work on the emotional bonding of the idea.

The second law is The Stickiness Factor. “Stickiness means that a message makes an impact. You can’t get it out of your head. It sticks in your memory,” Gladwell wrote in the book. He added, “The Stickiness Factor says that there are specific ways of making a contagious message memorable; there are relatively simple changes in the presentation and structuring of information that can make a big difference in how much of an impact it makes.” He shared the example of Sesame Street and how it made television sticky for children who were learning while having fun. “Sesame Street was built about a single, breakthrough insight: that if you can hold the attention of children, you can educate them,” Gladwell wrote.

He ends the book with a thought-provoking sentence, “In the end, Tipping Points are a reaffirmation of the potential for change and the power of intelligent action. Look at the world around you. It may seem like an immovable, implacable place. It is not. With the slightest push – in just the right place – it can be tipped.”

The writer is an independent researcher, author and
columnist. He can be reached at omariftikhar@hotmail.com and Tweets at @omariftikhar