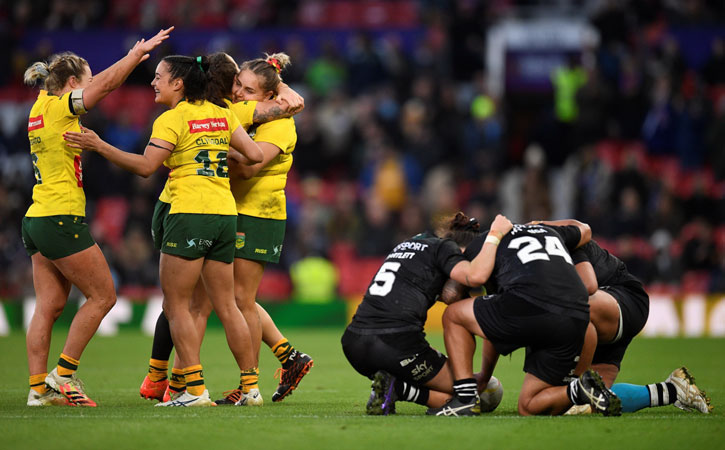 The Kiwi Ferns, who lost to the Jillaroos 10-8 in the group stage but conquered England in the semi-finals, were on the back foot from the off at Manchester United’s ground. Tries in the opening 15 minutes for Jessica Sergis and Isabelle Kelly put Australia firmly in control of their trans-Tasman rivals. Julia Robinson and Kelly, with her second, extended the lead to 20-0 at half-time.

Further tries came in quick succession from Emma Tonegato, Sergis and Tarryn Aiken. The two previous finals between the two sides, in 2017 and 2013 — both of which were won by Australia, were close affairs with only 10 and seven points separating them respectively.

Madison Bartlett eventually got the Black Ferns on the scoreboard with a try in the corner in the 65th minute. But it was all too little, too late, as the Australians added three more tries through Kennedy Cherrington (2) and Evania Pelite. Player-of-the-match Ali Brigginshaw and Lauren Brown added seven conversions between them to cap what proved to be a long afternoon under the cosh for the Kiwi Ferns. “That was unbelievable from all the girls,” Brigginshaw told BBC. “We had a defence focus and I’ve never been part of a group that can defend like that. That is something special. “We never rest in defence and you saw that today. We let them cross once and we’re probably still kicking ourselves about that. But we had a focus. We’re a very committed group.” New Zealand coach Ricky Henry said the result was “a tough one”.

“To Australia’s credit, they played really well today. It’s a big stage and a little bit of a learning experience for us. We’ve got a young squad and I hope in 2025 they’ll be better prepared to hav e a crack at it. “You’ve got to be ruthless, and that’s what they were — we didn’t have that. We’re proud of what we did prior to this but they showed a different class today.”