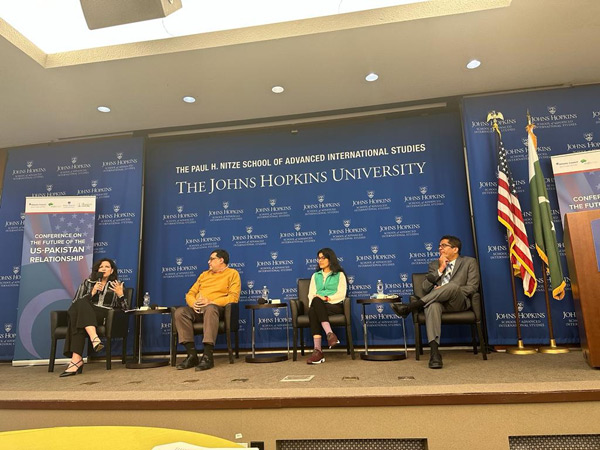 Foreign policy and security experts have expressed the hope that the future of Pak-US relations was bright. However, there was a need to expend time and energy to bolster cooperation in the fields of environment, economy, technology, and agriculture.

Addressing a two-day conference held Tuesday in Washington, experts argued that ties between the two countries had been topsy-turvy and the post-Afghan war period allowed both Islamabad and Washington to start afresh and de-hyphenate with a view to building cooperative mechanisms on issues of common concern.

The conference was organised by the Centre for Security, Strategy and Policy Research (CSSPR), University of Lahore, The School of Advanced International Studies, Johns Hopkins University, South Asia Centre, Atlantic Council, and Engro Corporation. The conference brought together Pakistani and American experts and officials to discuss a range of themes critical to the future of Pak-US relations.

In his welcome address, CEO and President of Atlantic Council, Fred Kempe said Pakistan was an enormous, resourceful, and important country, and therefore ties must be recalibrated and made even-handed.

The conference featured a keynote address by Ambassador of Pakistan to US Masood Khan who said that start-ups had increased exponentially in Pakistan which could prove to be propitious for US investors. He added that the presence of the US business giants in Pakistan, the burgeoning Pakistani-American community in the US, and the increasing trade volume between the two countries add strength, depth, and breadth to their relations. He talked about the devastation caused by the recent floods in Pakistan, adding that the country was looking to benefit from US technology and expertise in becoming more resilient to climate change.

The ambassador stressed that both countries must work towards promoting conflict resolution, crisis management, and strategic stability in the region. In his remarks, Special Representative for Commercial and Business Affairs at US Department of State Dilawar Syed said dealing with the impacts of floods was most compelling challenge for Pakistan. The two sessions of the conference focused on discussing different perspectives, identifying areas of common concern, and shedding light on the opportunities provided for by technology to the Pakistani economy. The sessions were moderated by Non-Resident Senior Fellow, Atlantic Council, Shamila Chaudhary, and Director, Pakistan Initiative, Atlantic Council, Uzair Younus.

Director, CSSPR, Dr Rabia Akhtar Dr Rabia Akhtar said Pakistan’s foreign policy direction and priorities must not change, owing to changes at the helm in the capital. Director China Program, Stimson Centre, Yun Sun said China was optimistic about the future of Sino-Pak relations. She further remarked China was open to not only rejigging its ties with Pakistan but also to seeing that country iron out difference with the US. Addressing the conference, former national security advisor of Pakistan Dr Moeed Yusuf said Pakistan wanted to enhance economic security, shift towards a two-pronged geo-economic paradigm, and avoid camp politics. He said Pakistan aspires to become a melting pot for economic interests of regional and global powers.