No relevance of ‘irrelevant’

* PTI chief says fair and transparent elections in country is the only demand
* A 'sea of people' is coming to Islamabad
* One message for entire nation: it's time to change the fate 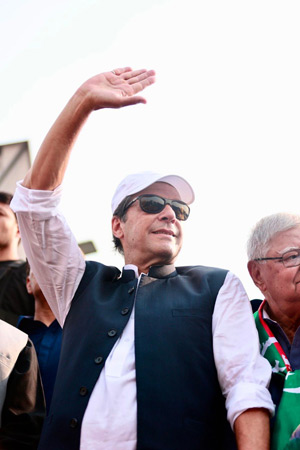 Former prime minister Imran Khan on Sunday hit back at Prime Minister Shehbaz Sharif as he resumed his ‘Haqeeqi Azadi’ march to Islamabad from Muridke. Addressing the participants of the march, Imran said “Shehbaz Sharif you gave a statement that I sent a message to you that we should sit together and decide about the army chief… look Shehbaz Sharif listen to me I don’t talk to boot polishers.” The PTI chief was referring to PM Shehbaz’s statement made a day earlier, wherein he claimed that he rejected a proposal from Imran about the appointment of the army chief, and instead offered him dialogue on the Charter of Democracy and Charter of Economy. Responding to Shehbaz, Imran further questioned, “What is the benefit of talking to you? What do you have to talk about? The way you were brought in power, at first you begged the Americans then you hid in the trunk of a car, and then polished boots.” The former premier furthered that: “Today you [Shehbaz] are roaming around in the world asking for money.” Alluding to having had backchannel talks with the establishment, Imran said: “Shehbaz Sharif said that I sent a message… Why would I send a message? I talked to those who make you dance like a puppet and my only demand is to have fair and transparent elections in the country.” The former prime minister also said that he was not raised in a “military dictator’s nursery”. 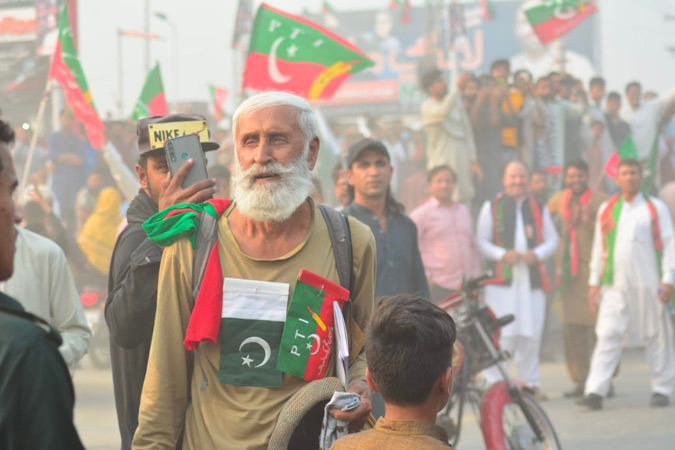 “I do not call Ayub Khan daddy like Zulfikar Ali Bhutto. I am not like Nawaz Sharif who built General Jilani’s home and pressed General Ziaul Haq’s knees to become a minister,” said the PTI leader. “I came to power with the people’s power not because of the establishment,” claimed Khan, adding that he only seeks rule of law in the country and the protection of the people’s rights. Imran Khan said that the “establishment decided to support thieves” because of which the former has “lost the support of the nation.” “The establishment of a country should stand with the nation only,” Khan said, adding that PML-N supremo Nawaz Sharif was a “criminal of the nation”, while PPP Co-chairman Asif Zardari was “the biggest disease of the country”. He told his supporters that this was the time to change their destiny and side with the truth. “These tyrants make us worship the idol of fear,” Khan said. Imran Khan said that a “sea of people” is coming to Islamabad and Rawalpindi. He asked his supporters in the twin cities to prepare. “I have set out for one purpose: we want justice in our country. I have one message for the entire nation today, it is time to change your fate,” Imran added. Calling on the establishment upon reaching Sadhoke, PTI chairman Imran Khan said that he and the nation would not stand with them for “supporting thieves”. “If the establishment thinks that by deciding to support thieves, it will make up accept them […] then forgive me but I and the nation are not with you [in this]. “Stand with us. The establishment always stands with the nation,” Imran said, adding that bowing before oppression and injustice would leave no difference between humans and sheep. Imran Khan claimed that journalists were fleeing from Pakistan and moving abroad because they were receiving “threats”. “Moeed Pirzada, Irshad Bhatti have gone abroad […] earlier, Sabir Shakir left the same way. Arshad Sharif shaheed, who was standing on the path of justice, got threats […] he was silenced, removed from the channel and then martyred,” he told supporters in Sadhoke. He went on to say that people on social media were receiving threats and were being oppressed. “You should be ashamed of what you did to Azam Swati. What was his crime? A tweet in which he criticised the army chief,” he questioned. “What kind of a calamity was it that you had to inflict torture on him [Swati]?” 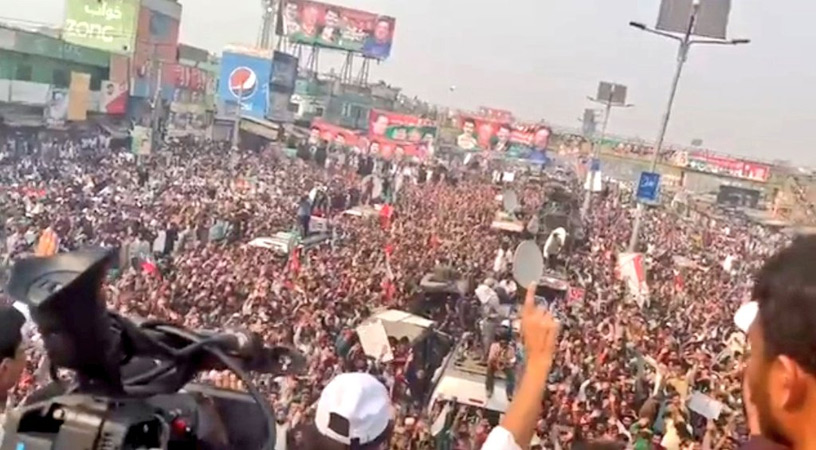 The PTI’s long march was halted after a journalist accidentally died while covering the march. Speaking to the participants, Imran Khan said that the march was supposed to move towards Kamoke, Gujranwala, today. “However, due to the tragic incident, we will stop the march immediately.” Khan also sent his condolences to the family of the deceased and said that he would pray for the departed soul.