‘The White Lotus’ retracts its fangs 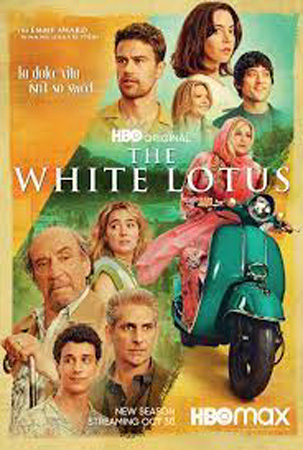 It’s easy to forget that the first season of The White Lotus – which, at the time, was the singular season of The White Lotus – was only six episodes. Series creator Mike White directed and wrote each installment, and the show unleashed its scathing satire and prickly characters so quickly and thoroughly that its effect was practically outsize. Each installment was like a snake rearing back and baring its fangs.

Season two, premiering October 30 and ordered after The White Lotus was critically and commercially well received, seems like it should be the same. White again holds all the cards as the sole writer-director – this time with seven episodes to work with, five of which were provided for review – and the narrative again follows a group of wealthy, self-involved people in a beautiful resort hotel that employs locals but frowns on cross-pollination between the visitors and the visited. Other elements are similarly parallel: The ensemble is sprawling, the couples are indulgently unhappy, the location is recognizable in some ways but foreign in others, the season begins with a dead body and then jumps backward a week, and Jennifer Coolidge returns as the perpetually neurotic Tanya McQuoid. But there’s also a new bluntness, and a noticeable tentativeness, that keeps this second season from hitting as hard and bruising as immediately as its predecessor.

In Hawaii, White put class criticism first and cis-het marital tension second. That allowed for characters like Sydney Sweeney’s Olivia and Brittany O’Grady’s Paula to emerge in all their corrosive glory while clutching Aimé Césaire’s Discourse on Colonialism and for White Lotus employees Armond and Belinda to give humanistic, relatable performances as resort employees pushed to the limit by nightmarish guests, like the disparate newlyweds Shane and Rachel (Alexandra Daddario). White wasn’t necessarily aligning himself with Olivia and Paula, who eventually allowed themselves to be subsumed back into the cocoon of wealth and protection offered by Olivia’s parents. Yet the inverse relationship between the accumulation of assets and general human decency – and the emotional and spiritual debt such accumulation imposes on both the individual and society at large – was clearly on White’s mind.

In Sicily, White switches his prioritization of these ideas. Paramount now are the miscommunications, resentments, and competition that can develop between people who swear to love each other for richer and for poorer. And unlike Shane and Rachel, whose off vibes were tied to Rachel’s realization that her husband’s toxically gauche sensibilities were unshakably entrenched, White here centers infidelity, to diminished effect. The result is a portrait that feels like half-Tennessee Williams play, half-Men are from Mars, Women Are From Venus. The cast, in particular Aubrey Plaza and F. Murray Abraham, elevates the material’s gender-based clichés (women are shrews, men cads) with performances that are precisely bemused or aggrieved. And the reused murder-mystery framing, now amplified with multiple casualties, does add some simmering tension to the episodes, which pick up the pace as the season moves forward. But without a greater guiding thesis about why marriage reaffirms gender roles for people who otherwise consider themselves progressive, or a secondary plot focus to round out this vacillating heterosexual frivolity and panic, The White Lotus feels defanged.

The opening credits are the first tell, with pastoral images of Italian life suddenly interrupted by animated sketches of copulating bodies. The intention is naughtiness, but the impact is repetition. Sex is presented as shocking, transgressive, and interruptive of our naturally peaceful state, but White doesn’t push that idea, or its unexpected conservatism, any further. The White Lotus adds to this generalization with recurring imagery of the Moor’s Head, dotting the resort with ceramic folk art that tells the story of a woman who learned that her Moorish lover was married and cheating on her with his wife and cut off his head. Nearly every suite in the Sicilian White Lotus is decorated with these statues, and White positions them as all-seeing voyeurs, their inanimate nature another seemingly unintentional reveal: We can watch as these couples feud and fuck, but our gaze is fixed and the interiority offered limited.

Gathering for vacation this time around are three groups internally bound by love, legacy, and money. Tanya is now married to Greg (Jon Gries), whom she met at the White Lotus in Hawaii, but is no less insecure or overanxious. She channels all that smothering energy into her relationship with her assistant, Portia (Haley Lu Richardson), of whom she demands endless emotional labor. Portia catches the attention of Albie (Adam DiMarco), on vacation with his father, Dominic (Michael Imperioli), a Hollywood producer who has messed up his marriage, and grandfather Bert (Abraham), of the generation of men who constantly hit on every woman but swear that they love their wives. Albie vows to avoid his father’s and grandfather’s sexually voracious ways, but his nice-guy act doesn’t exactly secure Portia’s desire. White has written in an undercurrent of straight men having to play games because straight women aren’t honest about what they want, and it’s difficult to tell how much sincerity he wants to assign to that argument.