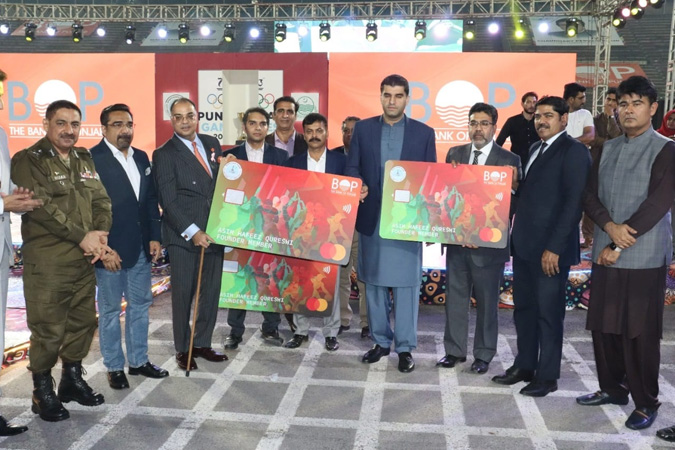 First-ever Athlete Card launched by Punjab Minister for Sportsand Youth Affairs Malik Taimoor Masood in a statement at the inauguration ceremony thanked the Bank of Punjab for extending every kind of support for the successful holding of 73rd edition of BOP Punjab Games.

Punjab Minister for Sports and Youth Affairs Malik Taimoor Masood said that the Sports and Youth Affairs Department Punjab is also going to launch the first-ever Athlete Card for the welfare of male and female athletes of the province in collaboration with the Bank of Punjab. Through first-ever Athlete Card, our sports stars can fulfill their needs in a respectful manner. “Definitely it is a revolutionary step for the well-being of national athletes and promotion of sports culture in the province,” he added.

He said, “The delegations from all the provinces of Pakistan are also participating in the historic Punjab Games and we are determined to promote unity, solidarity and brotherhood among all the provinces of the country. All sections of the society including transgender and special athletes are given due importance and representation in the 73rd BOP Punjab Games”.

Mr. Zafar Masud (President and CEO – The Bank of Punjab) in a statement on Wednesday lauded the Sports and Youth Affairs Department Punjab and Sports Board Punjab for organizing Punjab Games at such a large level. He announced that the first-ever Athlete card will be made more effective in the future so that the maximum number of athletes can utilize this great facility.

Mr. Masud said, “Enhancing women’s participation in sports is a vital area that has historically been lacking. It is encouraging to know that women, transgenders, and Persons with Disabilities are participating in this mega-event. The participation of delegates from other provinces like Gilgit-Baltistan, Balochistan, Khyber-Pakhtunkhwa, Sindh etc.

has further enhanced the diversity of this event. Our cooperation with the Sports and Youth Affairs Department Punjab and Sports Board Punjab will continue in the future as well for the holding of more such glorious sports events”