Yes, I advised Arshad to leave

* Imran Khan says handlers of political regime change won't let any regime change in their institution
* When given a chance in midst of extraordinary battles, ordinary pawns tend to bite off far more than they can chew
* Long march towards Islamabad will be peaceful 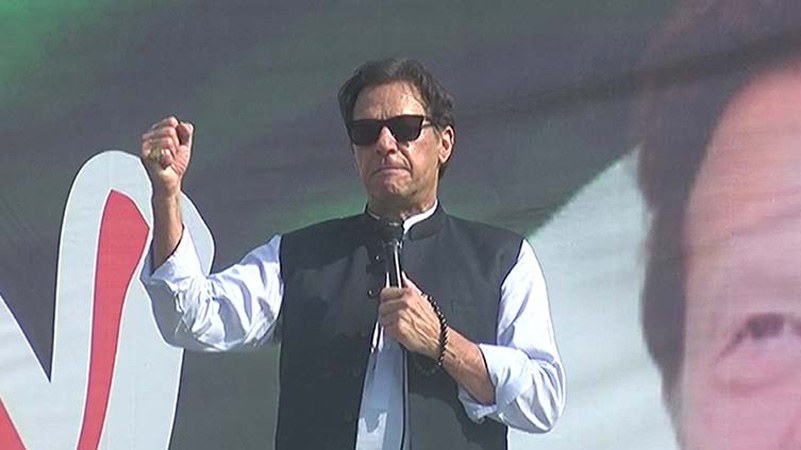 An overwhelming three days after the tragic murder of journalist Arshad Sharif in Kenya sent shockwaves across the nation, many are still fixated on debates involving what the victim did while he was alive instead of determining the realities behind his death. Responding to ruckus gaining traction over who had asked the hardcore critic to flee the country, PTI Chairman and former prime minister Imran Khan has record-breakingly exclaimed, “Yes, it was me!”

In an exclusive one-on-one conversation with Daily Times Group Editor Kazam Khan, the PTI chairman asserted on Wednesday that even though he stands by his claims, no one has dared asked him why he advised Mr Sharif to leave the motherland as early as possible. “Call me on any forum of your liking and I will bring to light all the details,” he continued.

Mr Khan wondered why those taking great interest in the naming game hesitated in finding answers about the life-threatening circumstances braved by a “patriot who never compromised his conscience.”

When asked about what he planned to achieve by taking on the citadel via his much-talked-about long march, Mr Khan talked about his resolve to show the strength of the public to the international community. “Once those supporting the fight for Haqiqi Azadi reach Islamabad, their numbers
alone would be enough to reflect what the Pakistanis want: an early election.”

That Pakistan is not a banana republic needs to be said out to the world, otherwise, the critical significance of the public mandate would be lost once and for all, he explained.

It was during the course of this crucial meeting that Mr Khan was pointed to a text message with details about the controversial press conference of PTI leader Faisal Vawda. Once seemingly aware of what beans he was about to spill, he could not help but smirk, “When given a chance in the midst of extraordinary battles, ordinary pawns tend to bite off far more than they can chew.”

Not willing to reveal any more details, he very calmly reiterated his resolve to lead a peaceful, calm protest demonstration from Lahore to Islamabad. Handlers of political regime change in Pakistan would not let any regime change in their institution, he casually mentioned with a whiff of confidence.

SIALKOT: Terming his long march to Islamabad as Pakistan’s “biggest freedom movement”, PTI Chairman Imran Khan vowed to continue his struggle till the next elections. “My heart believes it will be the biggest freedom movement in the history of Pakistan. We will continue our struggle till the nation gets its rights via elections,” Imran Khan told a student convention in Sialkot. “The old and the new workers should start mobilising. This is not a war for power or politics, but a war against a foreign conspiracy, which resulted in the installation of thieves on us,” he said.

The ex-prime minister said his long march aimed at securing “real” independence for the nation by defeating the ruling “dacoits”. “All the sacrifices [for Pakistan] will be in vain if the gang of thieves keeps ruling us,” he said, adding that his struggle would continue until the day the nation is allowed to elect its representatives against the “American slaves who are imposed on us repeatedly”.

The PTI chairman said that a living society stands up for justice and to stand up to oppression and injustice is jihad. He further said that the biggest of the robbers become Prime Minister in Pakistan and in Pakistan, big thieves are free while the smaller ones are in jails. Imran Khan went on to say that the country has lagged behind and the rest of the world has moved forward because there is no justice here, nations go up that improve education for the people.

The PTI chairman also said that his aim was never this strong before. “I urge the nation to stand with me, and if you don’t, it won’t affect me but your future would be devastated,” he said.

Issuing a warning of his own to the federal government, the ex-premier told Interior Minister Rana Sanaullah to gear up as he and his “handlers” would witness a sea of people in the capital. Lashing out at authorities, Khan said he would hold those accountable who had “mistreated” PTI leader and ex-interior minister Azam Swati.

The PTI leader was taken into custody by the FIA’s Cybercrime Wing (CCW) in Islamabad on October 13 after a case was registered against him over tweets against the army chief. However, he was granted post-arrest bail almost eight days later in return for surety bonds worth Rs1 million.

“They are picking up our social media workers,” Khan said, expressing his anger towards the authorities. “But it won’t just be Imran Khan [in Islamabad], it will be entire Pakistan.” In response to Khan’s call, PML-N supremo Nawaz Sharif said that the PTI chief would not bring a revolution in the country, rather his long march was just for “appointing an army chief of his choice”.

“The nation has seen his revolution in the last four years of his tenure.”

“Imran Khan, who terms others as thieves, has proven himself to be the biggest thief in history with indisputable evidence of foreign funding, Tosha Khana, and a robbery of 50 billion.”

The former premier condemned the murder of Pakistani renowned journalist Arshad Sharif saying that he was a patriot and bore the pain of Pakistan as no one ever had. “Today if the nation does not stand for him, there will be no difference between us and animals,” he said.

The PTI Chairman said that Arshad Sharif stood for truth and his conscience had no value. “I respected Arshad Sharif the most in journalism, I am very sorry for the martyrdom of Arshad Sharif.” He also maintained that journalists are being harassed all across Pakistan. He added, “Arshad Sharif was target killed and he is the martyr as he didn’t get scared of the threat calls nor did he step back.”