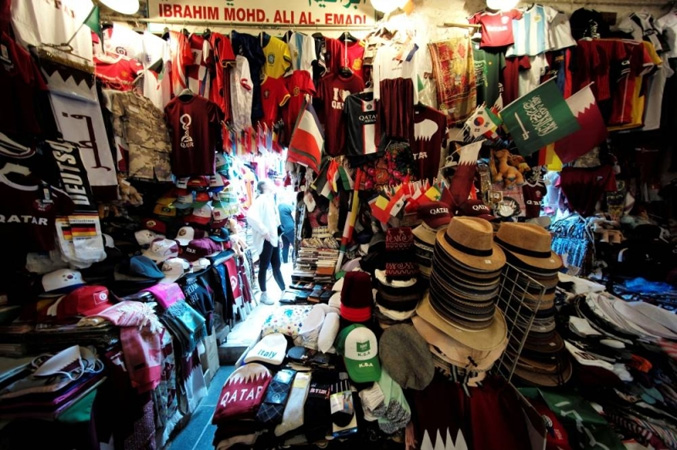 DOHA: Boxloads of wooden camels, plates with pictures of Qatar’s skyscrapers, gold necklaces, football hats and scarves arrive every day in Doha’s Souq Waqif market, where traders eagerly await World Cup fans. The narrow alleys of the century-old market will be a magnet for the one million football followers expected at the tournament, which kicks off on November 20. “There will be huge crowds, we have never experienced anything like this,” said Abdul Rahman Mohammed Al-Nama, head of the souq stables that organises camel and pony rides. “Inshallah (God willing), we are ready.” Crowds are already growing as a World Cup buzz mounts. Fan zone attractions and temporary stores are being set up around Nama’s camel enclosure and the hundreds of small stores selling incense, spices, carpets, gold and even falcons and other birds and animals. Press reports said stores will be allowed to open 24 hours a day during the World Cup.

When Souq Waqif opened in the early 20th century, traders stood at the entrance shouting at passers-by to buy their goods. Its name means the “Standing Market”. Devastated by a major fire in 2003, most of it has been rebuilt with arched pedestrian alleys, as part of a project to regenerate central Doha. Foreign fans “will have a lot of fun”, said Yasmine Ghanem, a 28-year-old member of Qatar’s national women’s golf team, who was sat in a Souq Waqif cafe drinking coffee and eating pancakes. “It will be a great mixture of Arab culture and football,” she added. Every evening, terraces are now filled with people drinking coffee and puffing on shisha tobacco pipes —- it is a zone with no alcohol. But traders, who have long been preparing for the World Cup, are expecting more. Nama cites the camels kept in an enclosure on a square as one attraction.

Souvenir stores have packed their shelves. At his small store selling gold necklaces, Saleh Mohammed is looking for a motorbike rider who can deliver to hotels. Dominated by the spiralling minaret of the Sheikh Abdullah bin Zaid Al Mahmoud Islamic Center, the Al Rawnaq company has for decades concentrated on textiles, cheap clothes and toys. Now the aisles are filled with scarves, flags and hats emblazoned with the names of the 32 competing nations —- especially hosts Qatar. In one corner, one worker makes flags, some up to 10 metres (33 feet) long. Tens of billions of dollars have been spent on a new metro and infrastructure that has given the city a dramatic makeover. Outside Doha, many new resorts have been built. Qatar wants to use the World Cup to bolster a campaign to increase visitor numbers from 1.5 million a year to six million by 2030. Qatar Airways chief executive Akbar Al Baker said his company is investing “hundreds of millions of dollars” on new infrastructure and promoting tourism.