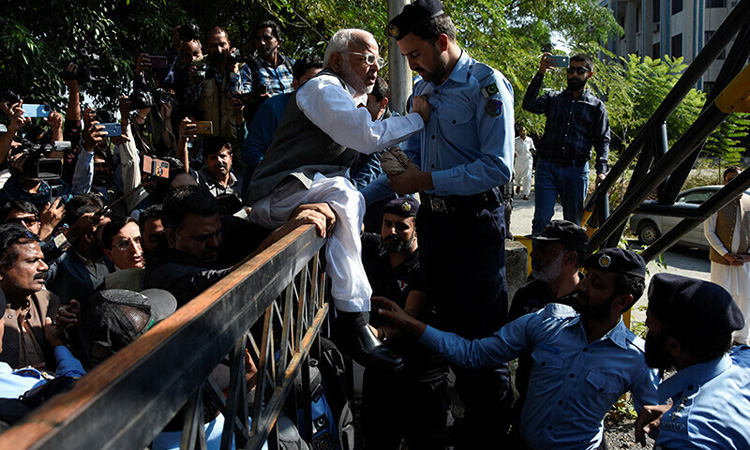 The Election Commission of Pakistan (ECP) Friday disqualified PTI Chairman and former Prime Minister Imran Khan in Toshakhana reference on charges of misdeclaration under article 63(1)(p) of the constitution of Pakistan. Article 63 (1) (p) of the Constitution states that an individual is, “for the time being, disqualified from being elected or chosen as a member of the Majlis-e-Shoora (Parliament) or of a provincial assembly under any law for the time being in force”. Chief Election Commissioner Sikander Sultan Raja announced the reserved verdict unanimously, handed down by five-member bench. The written ruling says the respondent had “intentionally and deliberately” violated the provisions contained [in] sections 137, 167 and 173 of the Elections Act, 2017, as he “has made false statement and incorrect declaration before the Commission in the statement of assets and liabilities filed by him for the year 2020-21”.

Hence, he attracts disqualification under Article 63(1)(p) of the constitution read with sections 137 and 173 of the Elections Act, 2017, it added. The ECP ruling follows up by saying based on the abovementioned findings, facts available on record and keeping in view the argument of learned counsel for parties herein, “we are of the considered opinion that the respondent has become disqualified under Article 63(1)(p) of the Constitution read with Section 137,167 and 173 of the Elections Act, 2017, consequently he ceases to be a member of the National Assembly of Pakistan and his seat has become vacant accordingly”. The ruling said as the respondent “has made false statements and incorrect declaration”, therefore he has also committed the “offence of corrupt practices” defined under sections 167 and 173 of the Elections Act, 2017, punishable under Section 174 of the Elections Act, 2017. “The office is directed to initiate legal proceedings and to take follow-up action under Section 190(2) of the Elections Act, 2017,” the verdict added.After the ECP’s verdict, Imran could also cease to be the PTI chairman as per an earlier judgement by the apex court.Member National Assembly (MNA) Barrister Mohsin Nawaz Ranjha, carrying signatures of lawmakers Agha Hassan Baloch, Salahudeen Ayubi, Ali Gohar Khan, Syed Rafiullah Agha and Saad Waseem Sheikh had submitted the reference to National Assembly’s speaker Raja Pervez Ashraf, alleging PTI Chief and ex-Prime Minister Imran khan for “not sharing details” of Toshakhana gifts and proceeds from their alleged sale. Speaker National Assembly Raja Pervaiz Ashraf, subsequently forwarded the reference in the month of August to the Chief Election Commissioner (CEC) Sikander Sultan Raja for further action. Established in 1974, the Toshakhana is a department under the administrative control of the Cabinet Division and stores precious gifts given to rulers, parliamentarians, bureaucrats, and officials by heads of other governments and states and foreign dignitaries.According to Toshakhana rules, gifts/presents and other such materials received by persons to whom these rules apply shall be reported to the Cabinet Division.