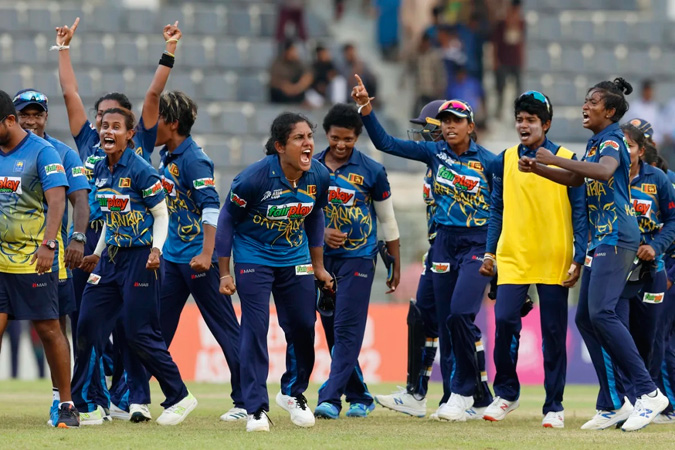 LAHORE: Sri Lanka qualified for the final of the Women’s Twenty20 Asia Cup after beating Pakistan by one run in a thrilling semi-final at the Sylhet International Cricket Stadium in Bangladesh on Thursday. Requiring nine runs in the last over, and with three runs required to win off the final ball, Nida Dar was run-out while attempting to take a double, as Pakistan managed to score 121 for six in the 20-over match. With 123 required to win, the opening pair of Muneeba Ali and Sidra Amin provided a solid 31-run start to the innings. Left-handed Muneeba scored 18 off 10 balls, hitting three fours, before getting run out on the first ball of the fourth over. After Muneeba’s departure, captain Bismah Maroof joined Sidra and the pair added a 16-run partnership for the second wicket.

Sidra (nine off 20, 1×4) returned to the hut during a reverse flick off Inoka Ranaweera on the last ball of the seventh over with 47 runs on the board. In the batting powerplay, Pakistan scored 46 for one and struck six fours. However, the team found itself in a spot of bother after losing Omaima Sohail (10, 14b) in the 11th over. At the crucial juncture of the match, Bismah and Nida managed to take Pakistan to 107, with Bismah getting dismissed for 42 off 41, studded with four fours. The pair stitched 42 runs for the fourth wicket. Bismah’s wicket gave a ray of hope to Sri Lanka and they restricted Pakistan to 121. Nida scored run-a-ball 26 and struck one four. For Sri Lanka, Inoka Ranweera bagged two wickets for 17 runs.

Earlier, after opting to bat first, Sri Lanka managed to score 122 for six in their 20 overs, on the back of a 50-run partnership between Harshitha Samarawickrama (35, 41b, 1×4) and Nilakshi de Silva (14, 27b). Opening batter Anushka Sanjeewani was another notable run-getter with 26 off 21 balls, which included one four and one six. Nashra Sandhu was the most successful bowler for the winning team with match figures of 4-0-17-3. Spinners Sadia Iqbal and Nida and right-arm fast Aiman Anwer scooped one wicket each. Sri Lanka will now meet India in Women’s Asia Cup final on October 15.