Internationally acclaimed Al-Azhar University of Islamic teachings warned against fatwas and said vaccination against the deadly Polio disease was a “religious, medical, and humanitarian duty.”

The Al- Azhar University dismissed the fatwas issued in Pakistan against the Polio vaccination of children and termed it a violation of the rights of the children and their families.

The fatwa said that prohibiting any vaccine that is beneficial for children, is against the Sharia. 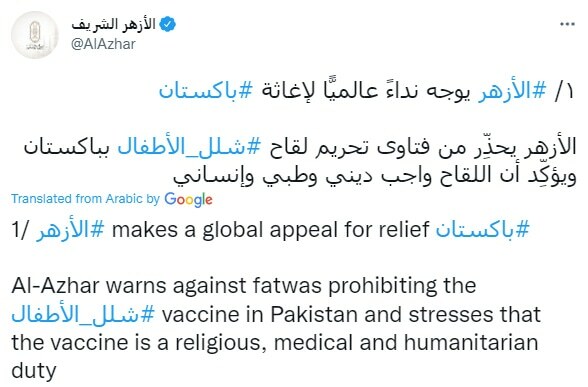 Violence, fear and misinformation offer challenges to authorities trying to reach every child who needs the polio vaccine in Pakistan, which has reported 19 cases this year.

The university’s statement came after Health Minister Abdul Qadir Patel met Grand Imam of Al-Azhar University Prof Ahmed At-Tayyeb in Cairo, where he briefed his host on the flood crisis in Pakistan.

The Al- Azhar also urged the people, relief organizations, and countries to reach out to the flood-affected people of Pakistan, whose livelihood, homes and infrastructure have been devastated by the recent floods.

During a five-day immunization campaign started on August 22 in Khyber Pakhtunkhwa, over 210,000 children under the age of five had given anti-polio drops in the district.

The head of the district health department Dr Fazl Maula said that 869 teams including fixed, mobile and transit had been constituted to administer polio drops to the target population by visiting houses, bus terminals and at fixed points.

On the occasion, Deputy Commissioner directed all administrative officers, Teshildars and officials of the health department to concentrate on the refusal cases and convince such parents to get their children vaccinated against the crippling disease.