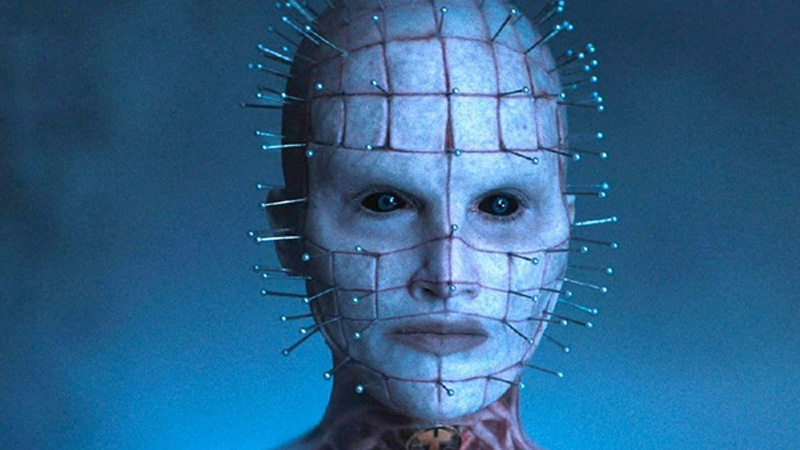 Prior to reviewing the new installment in the long-running (35 years!) Hellraiser horror movie franchise, I did my due diligence. I rewatched all 10 prior films, from the acclaimed 1987 original and its 1988 sequel through the ensuing two theatrical and six direct-to-video entries. Throughout the marathon, I took copious notes, careful to track the characters and plot developments through their many permutations.

Sure, I saw the first two films back in the day, and may even possibly have caught 1992’s Hellraiser III: Hell on Earth and 1996’s Hellraiser IV: Bloodline. But by the time the series went straight to home video, I happily bailed out, not being the type to proudly possess a treasure trove of horror movie memorabilia in my basement. So for all you Hellraiser aficionados out there, apologies.

For the uninitiated, the series, originally based on Clive Barker’s novella The Hellbound Heart (the writer also directed the original film), revolves around a mysterious puzzle box known as the “Lament Configuration,” a sort of demonic Rubik’s Cube that serves as a portal for the sadistic, otherworldly beings known as the Cenobites.

The Cenobites (am I the only one for whom the name conjures up images of delicious sugary treats purchased in shopping malls?), are in the habit of brutally torturing any humans who have the misfortune of summoning them. Apparently dedicated to exploring the thin line between pleasure and pain, they would have fit right in at ’80s-era S&M clubs.

The Cenobites’ leader is the iconic horror character Pinhead, previously played in most of the films by English actor Doug Bradley. For this remake/reboot/sequel (it’s a little of each), Jamie Clayton (Sense8) makes history of sorts as the series’ first female Pinhead. How well this will go over with the fans is anybody’s guess, since most horror movie buffs are not exactly known for their dedication to gender parity. (Just ask anybody involved in the female Ghostbusters reboot.) But the character was originally conceived by Barker as androgynous, and Clayton, her voice electronically altered, strikes a suitably scary, forbidding and even sensual figure. Assuming, that is, that you don’t mind the fact that her outfits consist of her own flayed skin and she has, you know, large pins sticking out of her head.

The storyline, stretched out to an overlong two hours, revolves around Riley (Odessa A’zion), a young woman with addiction issues who impulsively goes along with the plan of her boyfriend Trevor (Drew Starkey) to burgle a storage unit. The only item they find there is the puzzle box, which has the unfortunate tendency to stab its users in their hands. All hell literally breaks loose when that happens, beginning with the disappearance of Riley’s brother, Matt (Brandon Flynn).

Riley and Trevor, with the aid of Matt’s boyfriend (Adam Faison) and their roommate Nora (Aiofe Hinds), attempt to get to the bottom of the mystery, which leads them to such creatures as The Chatterer, The Whisperer, The Gasp, among others, as well as Pinhead. There’s also a depraved billionaire (Goran Visnjic, enjoyably chewing the scenery), who unleashed the Cenobites in the first place, and his shady lawyer (Hiam Abbass, Succession, Ramy).

The new Hellraiser looks terrific (at least what you can see of it, it’s awfully dark), boasting a visual stylishness commensurate with its relatively large budget and the talents of its director David Bruckner, who, judging by this and the recent The Night House, is quickly establishing himself as a horror filmmaker to be taken seriously.

The screenplay, written by Ben Collins and Luke Piotrowski (veteran writer David S. Goyer gets a story credit), proves less interesting, never bothering to fully flesh out its determinedly diverse assemblage of characters. Of course, considering what winds up happening to most of their flesh, that’s not necessarily a major drawback.

Fans will be relieved to know that this Hellraiser definitely doesn’t skimp on the gore, providing enough viscera and flayed skin to satisfy the most bloodthirsty viewers.

When a pin pierces someone’s flesh, you even occasionally see the damage from inside the body, as if to provide an educational anatomical experience for young viewers looking to enter the medical profession. Special mention must be made of the wildly imaginative creature designs and makeup (which leave its cinematic predecessors in the dust), the immersive sound design and the effectively creepy music score, which incorporates familiar themes from Christopher Young’s original.