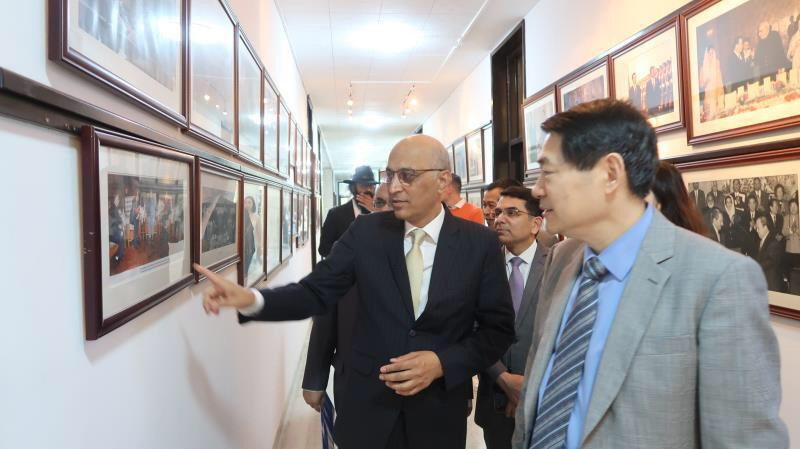 The Embassy of Pakistan in Beijing held an event in collaboration with Center for China and Globalization (CCG) to engage the thought leaders centered in Beijing in order to raise awareness about the recent floods in Pakistan. International organizations, Chinese think tanks, NGOs, Global Young Leaders Dialogue (GYLD) members and members of the Pakistani community attended the event.

Speaking on the occasion, Ambassador Moin ul Haque briefed the audience about the extent and nature of the recent unprecedented floods in Pakistan. Expressing gratitude for the support extended by international community particularly China and UN, he reiterated the need for proactive climate action and international solidarity to mitigate the effects of climate change.

The Ambassador stressed that it was unfortunate that despite being a low carbon emitter, Pakistan was among the countries most vulnerable to climate change. He called on rich countries to help the developing states affected by climate change. He also hoped that international community would remained engaged with Pakistan in the rehabilitation and reconstruction phase.

In his remarks, Mr. Henry Huaiyao Wang, President of CCG, highlighted that strengthening international cooperation on climate change was a matter of utmost urgency. Sharing China’s experience in tackling climate change, he expressed solidarity with Pakistan and welcomed the diverse group of speakers and audience to the event.

Ms. Mabel Lu Miao, Secretary General of CCG and Founder of Global Young Leaders Dialogue (GYLD) noted the huge losses of life and essential infrastructure due to floods in Pakistan. She highlighted the need for collective action in the wake of the climate catastrophe in Pakistan and stressed the importance of international solidarity in this regard.

The speakers appreciated the Embassy’s efforts in bringing different thought leaders on one platform. They expressed their sympathies and sentiments, and expressed the resolve to cooperate with Pakistan for proactive climate action and reconstruction.

The event also included a panel discussion by Global Young Leaders Dialogue (GYLD) involving representation of 7 different countries. During the dialogue, the panelists deliberated upon various ways to tackle climate change and shared success stories from their respective countries in environmental protection. They particularly highlighted the responsibility that rests on youth for finding innovative and focused solutions to the problem.

CCG is a leading Chinese global think tank specializing in international exchanges, and globalization of Chinese talent and enterprises.