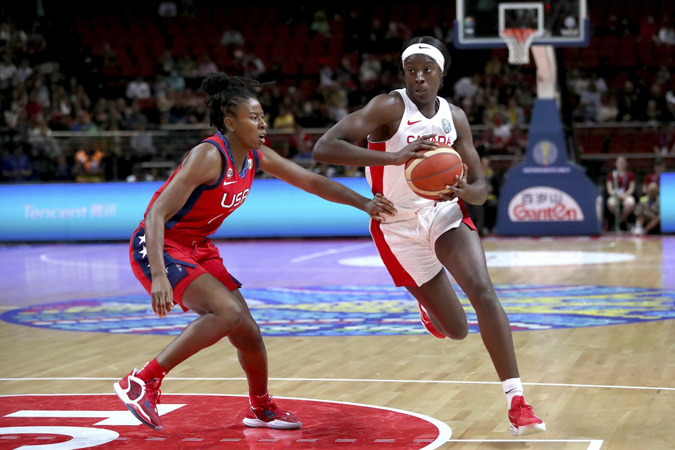 SYDNEY: Breanna Stewart drilled 17 points as clinical reigning champions the United States crushed Canada 83-43 in record-breaking fashion Friday to set up a women’s basketball World Cup final against first-timers China. They opened with 15 unanswered points and never relented, extending their World Cup win streak to 29 games, with their reward a clash with a powerful Chinese team that upset Australia 61-59 in a pulsating last-gasp triumph. China, missing ill star player Li Meng, made their maiden final after Wang Siyu converted two free-throws with just 3.4 seconds on the clock in front of more than 11,000 raucous fans at the Sydney SuperDome arena.

Ever-dangerous Las Vegas Aces’ star A’ja Wilson added 15 points and 12 rebounds for the USA as they zero in on a fourth straight title and 11th overall. It was the biggest winning margin in a World Cup semi-final, with Canada’s tally the lowest in a last-four clash. The USA were always overwhelming favourites in their 10th consecutive World Cup semi-final, having never failed to reach the last four since the knockout stage was introduced in 1986. In contrast, world number four Canada had got this far just once before, in 1986, when they also crashed to the USA.

Stranglehold: The Americans’ depth, defence and scoring talent were on full display. They have found success inside all tournament, sinking 55 points a game in the paint ahead of the semi-final, while punishing errors. It was a similar scenario against Canada, who have taken big strides under coach Victor Lapena but struggled against the speed of their opponents. The USA’s 15 straight points at the start gave them an immediate stranglehold and Canada never recovered. While the USA shot 79 percent, Canada could only manage 11 percent as they fell 27-7 behind after the first quarter. The margin grew in the second frame to 45-21, with Seattle forward Stewart at the forefront.

They put on another 22 points in the third quarter to build a huge 38-point buffer going into the final stretch. Australia and China both went into their semi-final with identical 5-1 tournament records, with the hosts losing to France on the opening night and China defeated by the USA. China suffered a huge blow ahead of the match when their leading points scorer Li was ruled out with a fever, but they still prevailed and coach Zheng Wei said the noisy Chinese fans helped them over the line. Australia edged ahead 17-13 in the fast-tempo first quarter, but China came back strong in the second frame, led by towering centre Han Xu who hit a game-high 19 points. They won it by 10 points to go 36-30 in front as Australia’s shooting percentage dropped. In an increasingly frantic match, the home side closed the gap to 47-44 heading into the home stretch. It looked destined for overtime when Sami Whitcomb gave away a foul and Wang stepped up to cooly covert the free-throws, sparking wild celebrations.