* Mr DT believes if Imran Khan or his team were behind stealing cypher, they must have done it before their ouster
* If cypher was missing from PM House, why it was not pointed out during second NSC meeting on April 22
* If cypher was stolen after April 22, it has been Shehbaz's govt since
then and he must be responsible
for any such incident 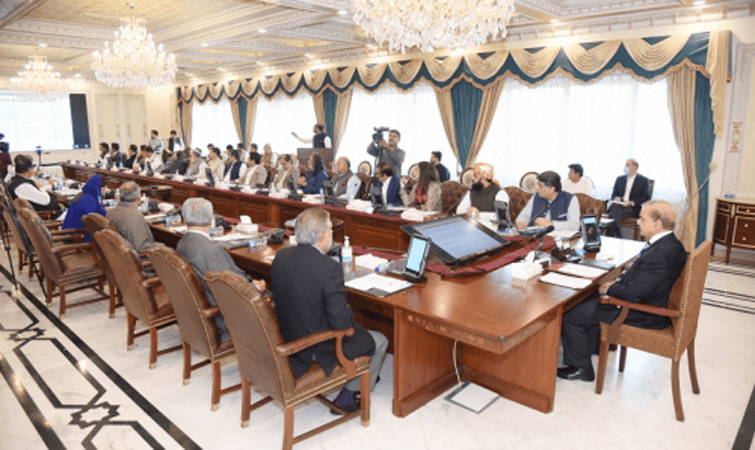 The federal cabinet has accused former prime minister and PTI chief Imran Khan of sacrificing key national interests for political gains by giving fictitious meaning to a diplomatic cypher, saying he has violated his oath and the “Official Secrets Act”.

While declaring the theft of the cypher from the records a serious matter, the cabinet formed a special committee of the cabinet to determine legal action against all those allegedly involved, including Imran Khan, ex-principal secretary to PM Azam Khan and senior ministers of the then PTI government. The meeting also discussed the issue of audio leaks in detail and endorsed the decision of the National Security Committee (NSC) to conduct a thorough investigation into the matter. On Wednesday, the NSC okayed the formation of a body to investigate audio leaks. During the federal cabinet meeting, the participants expressed serious concern over the fact that the audios of Imran Khan, Azam Khan and other persons related to the diplomatic cypher have exposed the “criminal conspiracy” of the former government and ex-PM.

The cabinet noted that the diplomatic cypher was given fictitious meanings to sacrifice key national interests for political gain and stolen after committing ‘fraud, forgery, and fabrication’. “This is a serious violation of the constitutional oath, other relevant laws, regulations, especially the ‘Official Secrets Act’,” the cabinet added.

“It is an unforgivable crime against the state by giving priority to political interests over key state interests,” the cabinet statement said. “Therefore, according to the constitution, law and regulations, it is necessary to investigate the whole matter carefully and to determine the responsible parties and punish them strictly according to the law.” The official statement further stated that a detailed briefing was given to the cabinet on cypher issue and it was revealed that the copy of the diplomatic cypher was missing from the PM House’s records.

It added that the cabinet was told that although there was a record of the receipt of the cypher sent to the former premier at the PM House, its copy was not available in the record.

The meeting declared that “theft of diplomatic cypher” from records was a serious matter. After a detailed consultation, it said, the cabinet formed a special committee of the cabinet which will determine the legal action against all those involved in it. The NSC, which includes all services chiefs as well as the head of Pakistan’s top intelligence agency, took up the matter on March 31 with then premier Imran Khan in the chair. The forum decided to issue a “strong demarche” to a country that it did not name over what it termed as “blatant interference in the internal affairs of Pakistan”. It had also termed the interference “unacceptable under any circumstances” and said the language used in the communique was undiplomatic.

While the forum had stopped short of calling the interference a conspiracy at the time, another meeting of the NSC was held on April 22 with newly elected premier Shehbaz Sharif in the chair, and which included the same military chiefs who attended the March During its second meeting, the NSC “reaffirmed the decisions of the last NSC meeting” and explicitly went on to add that it found no evidence of a foreign conspiracy.Political observers have, however, raised questions over cabinet’s announcement of cypher missing from PM House records. They say Cypher was discussed in second NSC meeting on April 22 with Prime Minister Shehbaz Sharif in the chair. They maintained that If Imran Khan or his team were behind stealing the cypher, they must have done it before their departure from the PM House. If cypher was not there at the PM House on April 22, why it was not pointed out in the second NSC meeting chaired by PM Shehbaz and attended by all services chiefs. And if it was stolen after April 22, it has been Shehbaz Sharif’s premiership since then and he must be responsible for any such incident, they opined.

* Federal cabinet informed that copy of cypher is ‘missing’ from PM House g ‘Theft’ of diplomatic cypher records an ‘unforgivable crime’ and violation of Official Secrets Act, 1923 g Special committee formed to determine legal action against ex-premier, ex-principal secretary to PM and senior ministers g Act an ‘unpardonable crime’ against the state which is tantamount to prioritising political interests over state interests