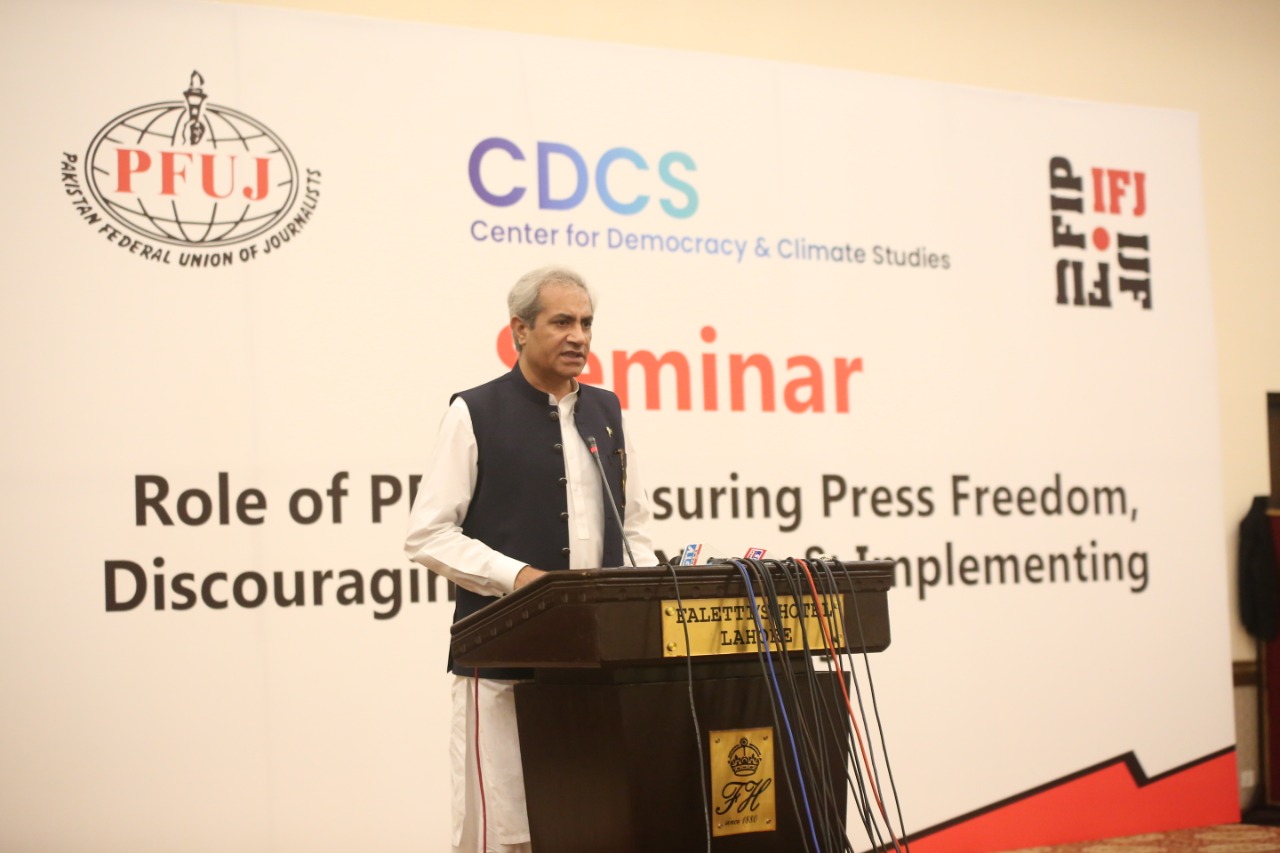 LAHORE: The speakers including politicians, renowned media personalities and policymakers on called for effective measures to do away with fake news phenomenon and legislation to handle the unbridled media content as well as social media.

At a seminar on “Role of PFUJ in Ensuring Press Freedom, Discouraging Fake News & Implementing Media Laws” it was resolved not to tolerate any restrictions on freedoms of media as well as the practice of rendering the news anchors off-air.

Pakistan Federal Union of Journalists, International Federation of Journalists and Center for Democracy and Climate Studies organized the event. The PFUJ leadership asked the government to approach them along with the evidences in case any institution had any complaint against any news anchor. They also called for equal air time to all the political parties putting aside the personal biases, in true spirit of the journalistic principles.

The speakers called for true implementation of Article 19 of the Constitution which says, “Every citizen shall have the right to freedom of speech and expression, and there shall be freedom of the press, subject to any reasonable restrictions imposed by law in the interest of the glory of Islam or the integrity, security or defence of Pakistan or any part thereof, friendly relations with foreign States, public order, decency or morality, or in relation to contempt of court,  [commission of] or incitement to an offence.

Similarly, they said the enforcement of the Article 19A of the Constitution was also equally important which says, “The right to information (RTI) is the fundamental right of citizens, allowing them to access information from government and private bodies that receive public funds. RTI is based on the principle that information belongs to the people and public officials are only the custodians of the information.”

PFUJ Secretary General Rana Azeem, in his welcome remarks, said the social media had led to the unbridled media which necessitated the proper legislation by the government to ensure its productive use instead of the political victimization.

In his address, Senior Minister of Punjab Mian Aslam Iqbal said the media owners toe their own agenda which was against the journalistic principles.

He said media was responsible to highlight real public issues instead of mere serving the interests of the elite class.

He said a convicted person, who was supposed to be behind bars, was enjoying his stay in London because the country’s institutions accepted the guarantee of a person in the case who himself was accused in different corruption cases.

He said a culture of baseless reporting must be done away with and the concept of real freedom could never be achieved without curbing the policy of state within state.

He said the press freedom was meant to differentiate between the right and wrong as mudslinging, character assassination or agenda-setting had nothing to do with journalism .

The senior minister said the government would do its utmost to provide housing facility to the journalist community in Rawalpindi as well as Lahore.

He said the government banned the live coverage of Imran Khan’s speech while allowing to broadcast the virtual address of a convicted individual from abroad.

He said Imran Khan created awareness among the masses for their rights and also challenged the status quo.

Referring to Imran Khan’s recent visit to the Government College University of Lahore, he said the elite made an unnecessary uproar and instead the PTI chief would be visiting more such institutions in the future to acquaint the youth with real political situation.

He said the country had almost touched the default stage and the yesterday’s decision had undermined the people’s morale, referring to Maryam Nawaz’s acquittal by the court in Avenfield Reference.

Advisor to Punjab Chief Minister on Information Omar Sarfaraz Cheema said PTI’s main agenda was to liberate the Pakistani society from the oppression of elitist mindset for which the media also played a supportive role as an influencer and opinion maker.

He said except some issues, the PTI government never gagged media.

He said PTI chief Imran Khan always stood up for media’s rights as both his party and media were pursuing a common agenda of societal reformation.

Cheema said just like any other institution, the media also suffered deterioration as it was used to target political adversaries as well as states. In prevailing situation, fake journalist was a more serious challenge than the fake news, he remarked.

The advisor said just like other institutions, the element of capacity building was absent in the media industry as well.

He said the social media had changed the nature fake news by giving a tool to the common man.

He said the true implementation of the Constitution could address all of the issues including those related to the press freedom.

Baloch said the polarization in the society had undermined the thinking process begetting irresponsible behaviours and intolerance.

He said media needed to redefine its priorities with ample space for public issues instead of politics.

Habib Akram said the lawmakers must know that the laws already existed on every issue including defamation but it only required true implementation. He said the unnecessary promulgation of new laws was a mockery of the system.

Executive Director of Dunya News Salman Ghani strongly advocated for doing away with the fake news saying it could be achieved only if the both journalists and political class acted together.

He said while exercising their right to freedom of speech, it was media’s responsibility to ensure respect to the institutions and called for drawing a line to define the limits.

He said it was also essential to differentiate between fake and incorrect news. An incorrect news can be rectified while the fake news usually is usually blind with no solid basis.

He said the farmers were on protest in Islamabad while the media had blacked them out.

Chaudhry said the Pakistan Muslim League-Nawaz had promulgated PECA Act while the PTI government made it more lethal through amendments.

He said despite being called the fourth pillar of the state, the media was the weakest segment in financial terms. The journalists who raise others’s voice remain unable to protect their own.

He questioned the imbalance of the country’s legal system towards the ruling class getting verdicts in its favors, leaving the poor majority to suffer.

He retold the government to link its advertisements with payment of media workers’ salaries for their protection against any exploitation.

PFUJ Vice President Saima Warraich, in her address, said the dearth of investigative journalism gave way to the fake news. He said a journalist could safeguard his credibility only by reportign truth.

She said in the current scenario, the role of media houses was more important that the media workers who usually toe the organization’s policy.

Former Vice President of National Press Club Islamabad Abdul Razzaq Sial the credibility was the biggest asset for a journalist and the race of ‘breaking news’ had abolished the check-and-balance system.

He said the print media used to be a strong editorial systems while the electronic and social media had no such concept.

He said fake news were released just to make them ‘viral’ without realizing their repercussions.

Secretary General of Punjab Union of Journalists Shahid Chaudhry said the social media had changed the shape of journalism.

He said the political parties claiming to be protecting the media freedom, start putting restrictions on media while coming to power. He called for formulating regulations to regulate social media, binding them not to work without an editorial system based on senior journalists.

In his concluding remarks, Azeem Chaudhry said the PFUJ always discouraged fake news and would continue to playing its role against the phenomenon.

He said being a trade union, the PFUJ would not tolerate any restrictions on media. He said the Union would continue to hold similar events for capacity building of the journalists.