* Imran Khan says 'good thing' that government has leaked audio over US cypher
* If government exposes cypher, "then I will play to it" 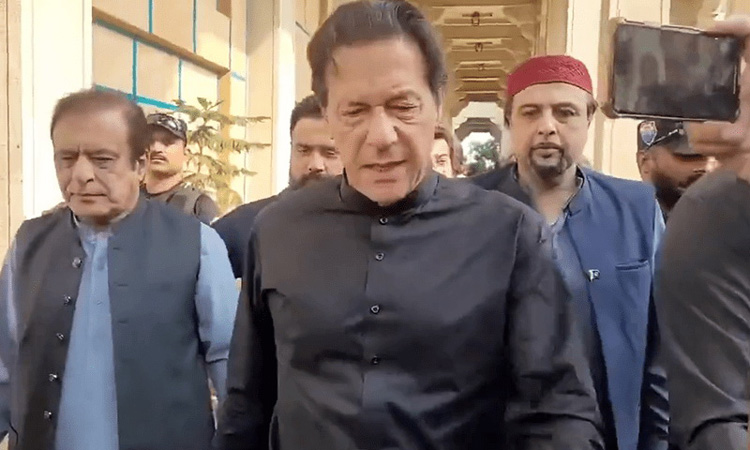 PTI Chairman Imran Khan said Wednesday that it was a “good thing” that the government allegedly leaked an audio about the US cypher, saying he thinks the cypher itself should also be leaked to the public.

“Well done on leaking it. I would say the cypher should get leaked too […] and so everyone knows what a big foreign conspiracy was made,” he told media.

The PTI leader further alleged that Prime Minister Shehbaz Sharif had leaked the audio conversation. A reporter highlighted that in the audio, Imran had said that he would “play to the cypher”, to which Imran replied that he was yet to play to it completely. He told the journalists that if they expose the cypher, he would “play to it”.

In a major development, a sound bite of former prime minister Imran Khan speaking about the US cypher surfaced earlier in the day after multiple audio leaks of top government officials. The clip making rounds on social media seemingly features a conversation between Imran and his former principal secretary, Azam Khan, about a cypher that the PTI chief has for long presented as evidence of ‘a foreign conspiracy’ to oust him from the top office.

In the audio clip, a voice, believed to be Imran’s, is heard saying: “We only have to play on this. We don’t have to name [any country]. We only have to play with this, that this date was [decided] before. “The new thing that will emerge is that the letter ”

Here, the second voice, believed to be of Azam, is heard, suggesting holding a meeting on the cypher. “See, if you recall, in that the ambassador has written in the end to [send] a demarche. Even if the demarche is not to be sent, as I have thought a lot about it at night – you said they raised it – I thought about how to cover all this.

“But its (cypher’s) analysis will have to be conducted here. We will carry out the analysis and convert it into minutes as we want so that it becomes [part of] the office record.” He elaborates that the analysis would conclude that “it is a threat. It is called a threat in diplomatic language”.

The man, believed to Azam, adds that “minutes are in my hands we will draft the minutes”. Here, the person on the other end, purportedly Imran, is heard asking who would be called to the meeting. “Shah Mahmood, you, me and Sohail?”

Just these, the other person says. “We will do it tomorrow,” the person believed to be Imran replies.

In turn, the voice, supposedly belonging to Azam, is heard explaining that following this plan, “things will become a part of the record. “Consider that they are the consulate for the state. When he will read it out, I will easily copy it and it will be on record that this has happened.” Moreover, he suggests that “you (supposedly Imran) call the foreign secretary so that it doesn’t remain political and becomes a part of the bureaucratic record”. To this, the man believed to be Imran points out that an ambassador has written the cypher, implying that it should already be a part of the bureaucratic record since it has been written by an envoy.”But we don’t have a copy of it. How did they release it?” the person on the other end replies.