* For years we have seen Punjabi cinema giving one after other great romantic movies, comedy dramas and even period films 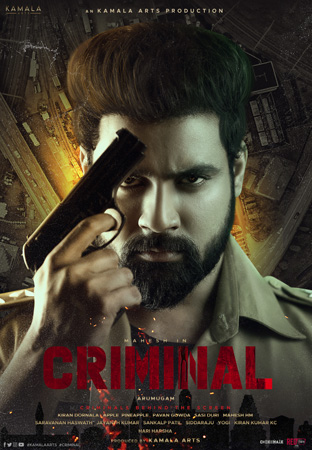 Mahi and Arjun try to mend their broken marriage piece by piece. They try communicating through different means in order to bury the hatch. However, before they can give their marriage a real shot, their life takes a 360-degree turn as their house gets occupied by some unwanted guests – “5 very dangerous and most wanted criminals” who are famous for their twisted psyche and no mercy attitude. Now, what do the criminals do with Mahi and Arjun, do they find an escape, who has the last laugh, everything unveils in this Punjabi suspense thriller.

For years we have seen Punjabi cinema giving one after other great romantic movies, comedy dramas and even period films, but when it comes to suspense thrillers, it is a road less travelled by Pollywood filmmakers. Nevertheless, today this so-called stigma has been broken with the Garinder Sidhu directorial ‘Criminal’.

As I pen down the review for this film, the foremost thing I would like to highlight is that this is not a story of just five criminals but seven. Five are the ones who are introducers in a house and the rest two are guilty of breaking a home. So let’s begin our proceedings by talking about one criminal at a time, starting with Prince Kanwaljit Singh.

Prince plays a psychopath killer who says it bluntly that he enjoys killing. He comes from a lineage of murderers and doesn’t wish any other profession for his own descendants as well. Right from his looks, to his dialogue delivery, to his expressions, everything compliments the craziness that resides in every bone and nerve of his character. His mere eye moment is more than enough to bring chills down your spine. Though Prince has played a complex character like this in ‘Warning’ as well, there he was on a revenge spree, he had a mission to fulfil, but in this film, he kills for fun; he kills because he likes to.

The next one that I would like to present in the court of the audience is Raghveer Boli. He plays a serial rapist, whose lust sees no difference between humans and animals. His character gives you the creeps. Boli does a teeth moment as his signature which makes him look really scary, and it is hard to digest that the man who is famous to tickle everyone’s funny bones can play such a dark shade that too so effortlessly.

Moving forward, we have Gurnav Deep Singh, Hrishab Sharma and Sanjeev Kaler. The former two have less screen time, but even with that, they manage to leave an impression. Their twisted mannerisms will make you think about them even after you leave the theatre. Now coming to Kappa, he is shown as the mastermind at the beginning of the film, but well while he played checker, his fellow criminal played the game of chess with him.

With this, we are done with the intruders, and it is time to talk about the other two criminals – Mahi and Arjun. First, thing first, Neeru Bajwa is not a Pollywood queen, she is a witch as she has the magical potion that is helping her age in reverse. The class that she brought on the screen with her character as Mahi is unbeatable. Also, in her career span of almost three decades, this is the first time she has tried her hand in a genre of thriller, and without a doubt has done a great job in the same. The movie opens with a song, where her character looks into the mirror and despite feeling low on the inside she tries to put on a fake smile. The turmoil of emotion that she is going through is established right in that second, and the grip thus formed doesn’t break loose at any point. However, our heart breaks when we see Neeru taking a beating from the goons. Nevertheless, we root for her as well when she stands back up to fight.

Further, the last one guilty on the screen is Dheeraj Kumar. He is a husband who tries to mend ways with his wife but avoids situations of conflict. Your heart will bleed for him because he is not a bad husband in the movie, but he is just not good at initiating conversations. However, if a situation comes, he is the one to take the bullet for his.

This is the first time that Dheeraj and Neeru have shared the screen together, and we have to admit, we couldn’t get enough of them.

Before we end, we have to talk about the masterminds behind the movie, the director, and the writers. Garinder Sidhu made sure that the movie doesn’t stretch or the subplots don’t turn boring. On one hand, where the actors did a fab job, we have to say that it was the vision of the director that brought out the best of the stars. And the men behind the story Sarvjit Khera and Naveen Jethi, as well as the dialogue writers Vinit Attri and Vishal Singh Deot deserve a special mention too. Though there were some predictable points in the plot, there were more moments that will keep you on the edge of your seats.

Last but not least, the garnish was the background score of the movie. It filled in the gaps wherever needed and maintained the pace and interest level of the film. So all in all, Pollywood served us well on National Cinema Day with ‘Criminal’.