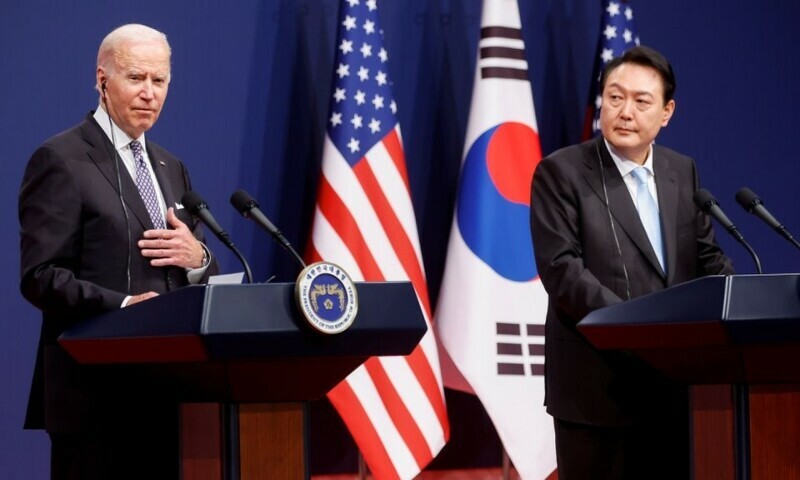 Already battling record-low approval ratings, South Korea’s President Yoon Suk-yeol has landed in trouble again after his disparaging remarks about a key ally the United States were caught on a hot mic.

Yoon, a political novice who took office in May, is in New York for the United Nations General Assembly, and chatted on Wednesday with Joe Biden during a photo op at the Global Fund where the US President had just pledged $6 billion.

“How could Biden not lose damn face if these f**kers do not pass it in Congress?” Yoon was caught saying to his aides afterwards in footage that went viral in South Korea.

A YouTube video of Yoon’s comments racked up over two million views just hours after it was posted, and “f**kers” became the number one trending topic on Twitter in South Korea on Thursday.

“The president’s words and actions are the national dignity of the country,” one YouTube commenter wrote.

Yoon’s crude comments appear to refer to Biden’s drive to increase US funding to the Global Fund, which would require congressional approval.

The United States is South Korea’s key security ally, with Washington stationing about 27,000 troops in the country to help counter nuclear-armed North Korea.

Yoon, a former prosecutor, has made what analysts describe as a string of unforced errors during his first months in office, which is typically a honeymoon period for new presidents in South Korea.

At one point, his approval rating dropped to 24 per cent, although it has since inched up to 32 percent.

His predecessor, Moon Jae-in, enjoyed approval ratings of about 70pc at the same stage in his term, polling data showed, and Yoon started work with 52 percent of people polled thinking he was doing a good job.

The hot mic comments come just days after Yoon’s office was forced to defend his decision to skip paying respects to Queen Elizabeth II’s coffin lying in state, allegedly due to “heavy traffic”.

In August, he was also criticised for a chaotic official response to US House Speaker Nancy Pelosi’s visit to South Korea, where she landed after a contentious stop in Taiwan.

Yoon’s critics were swift to seize on his latest alleged gaffe.

Yoon’s office told AFP it had no comment on the incident.