Relations between Canada and India suffer over Khalistan activism 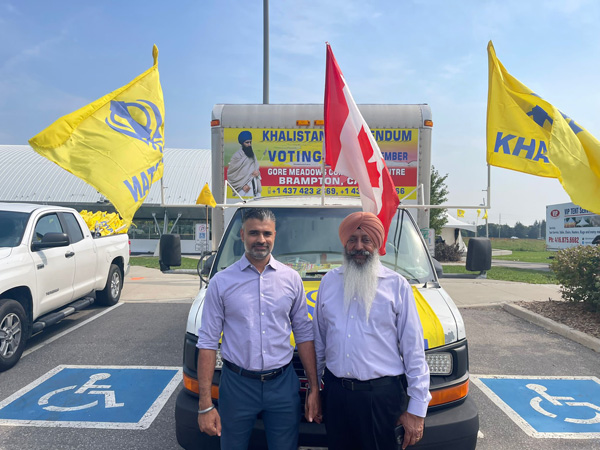 TORONTO: Tensions in Canada within the India community are at the knife’s edge after BAPS Swaminarayan Mandir in Toronto was vandalised with anti-Indian and pro-Khalistan slogans written at the entrance ahead of 18 September Khalistan Referendum voting which is set to attract tens of thousands of Sikhs.

Indian government has condemned the vandalism at the Mandir, calling on the Canadian Prime Minister to take action against the suspected Khalistani activists.

The vandalism incident comes after the local police announced it has arrested an Indo-Canadian man for tearing Sikh leader Jarnail Singh Bhindranwale’s banner in the city of Caledon, Ontario, ahead of the 18 September Khalistan Referendum.

Thirty-eight years after he was killed in ‘Operation Blue Star’ in Amritsar, India, nationalist Sikh leader Jarnail Singh Bhindranwale is regarded as a martyr, saint and icon of Khalistan movement by tens of millions of Sikhs. It’s believed that tensions in the Indian community in Canada have gone up after Sikhs protested attack on the revered Sikh leader.

Sikhs For Justice (SFJ), the organisation behind the Khalistan Referendum campaign, has plastered the city of Malton, Ontario, with posters of Khalistan carrying large sized pictures of Jarnail Singh Bhindranwale to whom Khalistan Referendum’s Canadian phases has been dedicated to. The SFJ has not commented on the spate of attacks but local Sikh campaigners have branded this a hate crime against Sikhs and their movement but the Ontario Provincial Police (OPP) confirmed that it has charged an Indo-Canadian man with criminal mischief for vandalism. 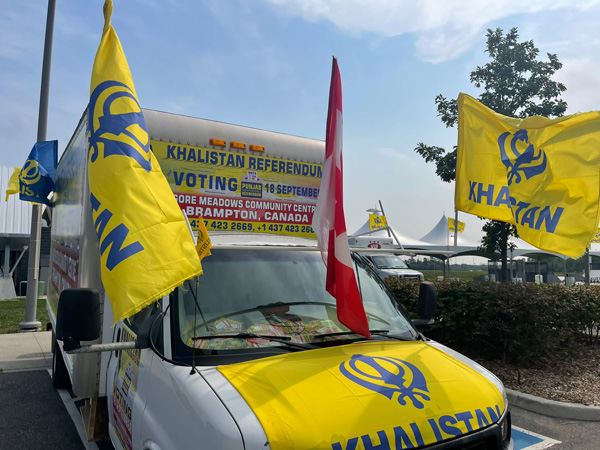 Following the vandalism, over 500 Sikh activists gathered outside the Indian consulate in Toronto and raised slogans against the Indian government and in favour of Khalistan. Sikh activists, carrying Khalistan banners, called on the Indian authorities to stop politics of division and accept demands of Sikhs. On Monday, the local Sikhs gathered in huge numbers at the local Gurdwara to offer collective prayers for the success of Khalistan Referendum. Two weeks ago, a five-kilometer-long car rally was held in Toronto which saw the participation of over 2,000 vehicles carrying flags of Khalistan. This is considered to be the biggest ever such rally in Canada of Sikhs.

Prior to that, pro-India community leaders aligned with the Indian government raised alarm that growing influence of Khalistan supporters was a matter of concern for the state of India and its integrity. The Indian govt has lobbied the Canadian govt for several months to stop Khalistan Referendum campaign but the Canadian govt has told Indian authorities its helpless to stop a legal and democratic activity taking place within its borders.

Tensions started much earlier but have boiled over to extreme level in recent days. In July this year, a statue of Mahatma Gandhi located at the Vishnu Mandir in Richmond Hill in the Greater Toronto Area (GTA) was vandalised by unknown men. Pro-Khalistani slogans on the 20-foot-tall statue were sprayed at the statue, leading to strong protest by the Indian community.

Indian media and politicians have alleged that Canadian prime minister Justin Trudeau’s party is believed to lend support to the Khalistanis due to the strong influence of the Sikh community in key constituencies.