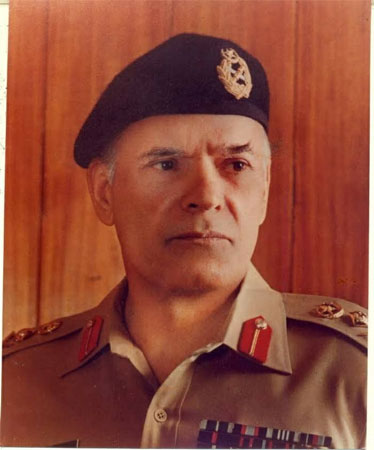 General Akhtar Abdul Rahman was born on June 11, 1924, in Peshawar. His father, Dr Abdul Rahman, died when he was only four years old. The family then moved back to their ancestral village in East Punjab. After completing his high school education at Ajnala High School, young Akhtar came to Amritsar and got admission to MAO College and then moved to Government College, Lahore. Akhtar did MA in Economics in 1945 after which he joined the Army and received a commission in 1947. As a young army officer during the partition days, Akhtar witnessed traumatic scenes, which left a lasting impact on his mind and personality.

General Akhtar had a vibrant career where he became part of all wars that Pakistan fought against India. He fought in the 1948 Kashmir War and was part of the famous Pandu Operation. He fought at Lahore in 1965 and was the first to open fire on the advancing Indian Army resulting in the title “Zarb-e-Awal” for his Regiment, 24 Medium. He captured Qasr-e-Hind at Kasur front in 1971 resulting in the title “Fateh Qasar-e-Hind” for his Regiment 45 field. He commanded the prestigious 12 Division in Kashmir from 1974 to 1978.

In June 1979, General Zia called General Akhtar to the Army House and offered him the coveted position of Director General Inter-Services Intelligence. It was after the assumption of its leadership that the ISI became one of the major organs of Pakistan. He worked tirelessly and gathered around his colleagues who were equally dynamic and determined to make ISI an organization that would have a great impact on the domestic and external policies of the country.

In December 1979, the Soviet Union invaded Afghanistan. The disappearance of Afghanistan as a buffer state increased Pakistan’s insecurity. Indeed, the US was the only western state that showed any serious concern but because of President Carter’s domestic difficulties resulting from the hostage crisis in Iran, he was not able to give any substantial support. However, when President Reagan came to the White House President Zia accepted his six-year 3.2 billion dollars package. But the fact remains that even before Reagan entered the White House, President Zia and Gen Akhtar had made up their minds to resist the Soviet Union onslaught in every possible manner.

“General Akhtar had a firm commitment to defeat the Soviets since the start of the war.”

After the Soviet invasion of Afghanistan, President Zia sent for General Akhtar who had recently taken over as Director General of ISI. At that time nobody in authority in Pakistan, and many foreign governments, thought the Soviet military might could be confronted. Afghanistan was written off as lost. The only person within the military to advocate supporting Jihad by Pakistan, and the only person to come up with a plausible plan for doing so, was General Akhtar. He convinced the President that not only was it vital to Pakistan’s interests to fight the aggressors but that there was every chance of defeating them. It certainly seemed impossible at the beginning but it happened and with such success that the world was astounded. Some years later, Zia was to say to him; “You have wrought a miracle; I can give you nothing worthy of your achievements. Only God can reward you.”

General Akhtar had a firm commitment to defeat the Soviets since the start of the war, which is confirmed by various accounts. For instance, in the early days of the Afghan war, while in a briefing General Akhtar asked for the maps of the Soviet Union and when the staff was unable to produce the maps Akhtar addressed the team: “Let me tell you one thing, I have decided to fight this war against the Soviets and until and unless I push them across the OMUS, I will continue fighting. Better get yourself prepared!”

When he proposed the plan that Pakistan would be fighting this war against the Soviets many senior officers were sceptical. They thought Akhtar was getting too optimistic. Many of them said that India was a separate story but Russians with all their aircrafts, artillery and heavy armour, backed by MI 24 helicopters would prove to be a tough test. In response, the confident general said: “Russians have made a big mistake by invading Afghanistan and they will pay a price for it. The same price which Napoleon paid when he invaded Moscow and which the Americans paid when they landed in Vietnam”.

When General Akhtar was given the responsibility of organizing military and material support for the Afghans there were no concrete plans, no defined goals, no supplies, and no organizational machinery to accomplish this mission. General Akhtar was entirely responsible for the planning and policy-making of this gigantic operation. He was also in charge of the implementation and constant monitoring. He built a powerful infrastructure, almost from scratch, and laid the foundations for excellent training facilities. Not only this but at the same time, General Akhtar was also successful on the diplomatic and political fronts. He had to work closely with the Ministry of Foreign Affairs in Pakistan and with the State Department, especially their branch that interacted with the CIA.

The next big step in the effort was to get the necessary support from the European and Muslim states. After the defeat of Vietnam, Americans were on the back foot and Russians were gaining strength day by day. It was decided by Pakistan that the war would be fought on two fronts, on one side would be General Zia who would handle the foreign affairs and the diplomatic issues and on the ground, it would be General Akhtar who would lead the effort in Afghanistan. The reason why the Americans were initially hesitant to provide aid to Pakistan was that they thought that the Afghan resistance would not last for more than a few months. But over time when the results started to show, Americans started providing more economic and military support. Under Akhtar’s leadership, the communist menace was not only confronted but forced to retreat and dismantled. Little wonder that the chief architect of this humiliation was on the top of the KGB’s hit list with a huge price on his head. Nevertheless, he never wavered or showed concern at the danger, but continued to press on with Jihad.

August 17th 1988, 03:46 PM General Zia’s plane took off from the runway of Bahawalpur along with five of his Generals including General Akhtar after a visit to a test site to observe a demonstration of the M1 Abrams tank. Shortly after takeoff, the control tower lost contact with the aircraft. Witnesses cited in Pakistan’s official investigation said that the C-130 began to pitch “in an up-and-down motion” while flying low shortly after take-off before going into a “near-vertical dive”, exploding on impact, killing all on board.

Many of us still don’t know much about this un-sung hero who, without a question, was the chief architect of the Afghan war. But we now know that if in 1979, Pakistan Army didn’t have such leadership this historical chapter could never have been written.