Webb telescope may have already found most distant known galaxy

* 'We're potentially looking at the most distant starlight that anyone has ever seen,' he said 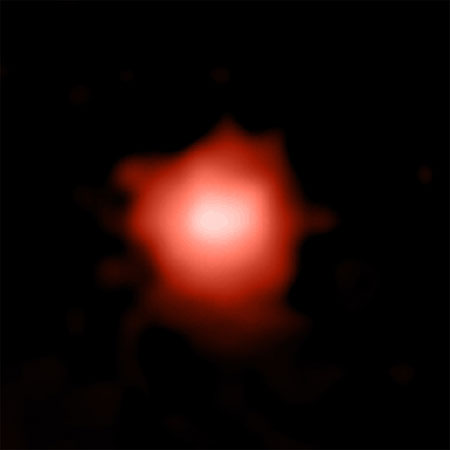 Just a week after its first images were shown to the world, the James Webb Space Telescope may have found a galaxy that existed 13.5 billion years ago, a scientist who analysed the data said Wednesday.

Known as GLASS-z13, the galaxy dates back to 300 million years after the Big Bang, about 100 million years earlier than anything previously identified, Rohan Naidu of the Harvard Centre for Astrophysics told AFP.

“We’re potentially looking at the most distant starlight that anyone has ever seen,” he said.

The more distant objects are from us, the longer it takes for their light to reach us, and so to gaze back into the distant universe is to see into the deep past.

Though GLASS-z13 existed in the earliest era of the universe, its exact age remains unknown as it could have formed anytime within the first 300 million years.

GLASS-z13 was spotted in so-called “early release” data from the orbiting observatory’s main infrared imager, called NIRcam – but the discovery was not revealed in the first image set published by NASA last week.

When translated from infrared into the visible spectrum, the galaxy appears as a blob of red with white in its centre, as part of a wider image of the distant cosmos called a “deep field.”

Naidu and colleagues – a team totalling 25 astronomers from across the world – have submitted their findings to a scientific journal.

For now, the research is posted on a “preprint” server, so it comes with the caveat that it has yet to be peer-reviewed – but it has already set the global astronomy community abuzz.

“Yes, I tend to only cheer once science results clear peer review. But, this looks very promising,” he added.

Naidu said another team of astronomers led by Marco Castellano that worked on the same data has achieved similar conclusions, “so that gives us confidence.”

‘WORK TO BE DONE’ — one of the great promises of Webb is its ability to find the earliest galaxies that formed after the Big Bang, 13.8 billion years ago. Because these are so distant from Earth, by the time their light reaches us, it has been stretched by the expansion of the universe and shifted to the infrared region of the light spectrum, which Webb is equipped to detect with unprecedented clarity. Naidu and colleagues combed through this infrared data of the distant universe, searching for a telltale signature of extremely distant galaxies. Below a particular threshold of infrared wavelength, all photons – packets of energy – are absorbed by the neutral hydrogen of the universe that lies between the object and the observer. By using data collected through different infrared filters pointed at the same region of space, they were able to detect where these drop-offs in photons occurred, from which they inferred the presence of these most distant galaxies. “We searched all the early data for galaxies with this very striking signature, and these were the two systems that had by far the most compelling signature,” said Naidu. One of these is GLASS-z13, while the other, not as ancient, is GLASS-z11. “There’s strong evidence, but there’s still work to be done,” said Naidu. In particular, the team wants to ask Webb’s managers for telescope time to carry out spectroscopy – an analysis of light that reveals detailed properties – to measure its precise distance. “Right now, our guess for the distance is based on what we don’t see – it would be great to have an answer for what we do see,” said Naidu. Already, however, the team have detected surprising properties. For instance, the galaxy is the mass of a billion Suns, which is “potentially very surprising, and that is something we don’t really understand” given how soon after the Big Bang it formed, Naidu said. Launched last December and fully operational since last week, Webb is the most powerful space telescope ever built, with astronomers confident it will herald a new era of discovery.