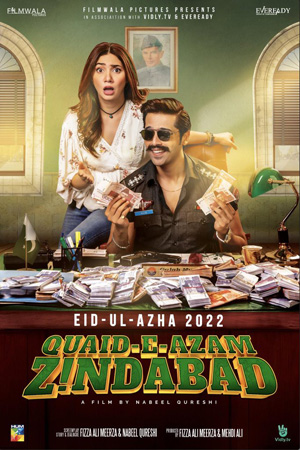 Quaid-e-Azam Zindabad is a newly released Pakistani featured film which stars the gorgeous and talented Mahira Khan and the brilliant Fahad Mustafa in lead roles. The movie has been directed by Nabeel Qureshi and it has been produced by Fizza Ali Meerza. The movie offers action-packed and entertaining sequences. The movie just got released on this Eid. According to the makers, the film started with a good response and it has been getting good reviews. Public is coming up with mixed reviews regarding film. Fans are highly praising Fahad Mustafa’s movie and they are saying that he doesn’t disappoint his fans. Well, many others are blaming the movie makers that the starting of the film seems to be inspired from Simba and Matrix. A part from that fans are saying that the film is getting margin because it has a unique story which has not been told in Pakistan but many people are of the view that they don’t even want the Bollywood Touch ( Bollywood Tarka ) in pure Pakistani films. They are of the view that the makers need to think differently. They said that now they won’t be blackmailed in the name of patriotism. Besides these reviews they said that the film will surely give you a good watch experience. Here are raw comments of public who watched film.