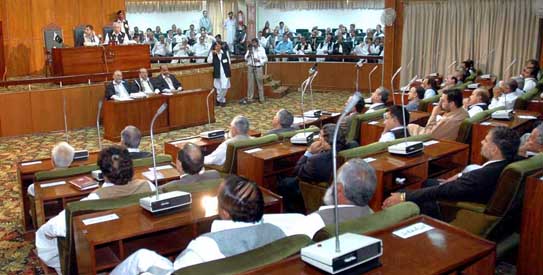 MUZAFFARABAD: Azad Jammu and Kashmir (AJK) Legislative Assembly, while expressing deep concern over the environmental degradation in the region, has constituted a ten-member committee comprising both treasury and opposition legislators to propose measures for the centre and regional government to overcome the situation.

The committee, after the conclusion of debate on an adjournment motion moved by opposition lawmaker Mian Abdul Waheed seeking the attention of the House towards this urgent issue, was mandated to present its report within a month.

The prime minister said environmental degradation and climate change was a global issue nowadays and the same was on top of the priority list of his government for which all resources would be utilised without any compromise, adding that ‘Clean and Green Kashmir’ was the slogan of his government.

He informed the house that the government had imposed a ban on constructions alongside the river banks in the region and the government will strictly enforce the law against cutting of green trees besides other measures to restore the beauty of the land.

While supporting the motion, he assured the house to make a comprehensive policy on environmental issues in light of the report of the house committee and other relevant suggestions from the experts concerned.

Opposition Leader Ch. Latif Akbar, while participating in the debate, suggested that the house committee or a government committee should approach the centre, Punjab and Sindh governments for allocations of funds in their budgets for conservation of AJK’s forests and environment as the fertility of agriculture lands in Punjab and Sindh was linked to the remain of forest and environment of the region.

To overcome the issue of deforestation, he suggested the government provide free electricity and subsidised LPG to the rural population in AJK to refrain them from wood-cutting for construction and burning purposes.

Former prime minister Raja Farooq Haider Khan, mover of the motion Mian Abdul Waheed, Minister Forest Akmal Sargala and other treasury and opposition members also participated in the debate and suggested various measures for conservation of forests and water resources in the region in the interest of the whole country.