‘Stranger Things 4’ cranks everything up way past Eleven 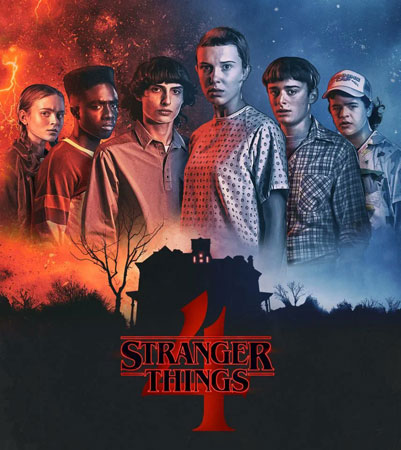 Stranger Things 4 is like the seasons that came before it in how it draws inspiration from the pop cultural canon of the ’80s, making its individual chapters feel like studied homages to the genre cinema of the era.

In this fourth instalment though, Stranger Things embraces a newfound sense of itself as something more than a stylized tribute to the creature features and coming-of-age classics that packed theatres decades ago. Stranger Things 4 is bigger, bloodier, and much more intense than the seasons that came before it, but it also feels like a natural evolution of the sprawling epic the Duffer Brothers have been telling from the very beginning.

Time has always been a somewhat tricky thing in Stranger Things’ fictional town of Hawkins, Indiana, where slimy portals to nightmarish parallel dimensions are known to occasionally open up, but it takes on a new significance as Stranger Things 4 catches up with its teen heroes. Set about six months after the events of its season 3 finale, Stranger Things’ newest batch of chapters opens on Mike, Will, Lucas, Max, Dustin and Eleven all doing their best to find some sense of normalcy after their last battle with a being from the Upside Down.

“Normal” for Eleven, Will, Will’s older brother Jonathan and the boys’ mother Joyce Byers means settling into a new life as a seemingly average family in California where they believe “Jane” – Eleven’s birth name – can get a fresh start. With Eleven’s powers on the fritz and her adoptive father Jim Hopper still missing, learning how to simply exist as a regular teenager is both a challenge and thrill for her. But Eleven’s genuine excitement and the Upside Down going all but dormant following their departure from Hawkins makes the Byers’ journey out West feel like something that’s right for them all.

Stranger Things 4 finds the rest of the gang back in Hawkins also mostly thriving as the town’s kids gear up for their impending spring break. With Lucas dedicating more time to Hawkins High’s basketball team and Max still coping with the death of her brother, Mike and Dustin find new friends in the Hellfire Club – a group of Dungeons & Dragons-playing outcasts led by outgoing senior Eddie Munson.

By splitting the kids up into smaller units and introducing other new characters, like basketball team captain Jason Carver and pizza-delivering stoner Argyle into their arcs, Stranger Things 4 establishes change as one of its defining themes this season. Stranger Things’ core group of childhood friends aren’t breaking up or falling out exactly, but they are growing up and apart as kids tend to do as they get older.

Leaning into that reality is part of the way that Stranger Things 4 tries to skirt around the fact that essentially all of its young actors have already visibly out-aged their characters. The distraction works, especially as Stranger Things’ central mystery pulls its protagonists closer together in the face of the supernatural once again. But when the kids are dealing with more grounded everyday challenges in normal settings, like getting a grasp on the social dynamics of their high schools, it’s occasionally hard to buy them as unpopular high school freshmen.