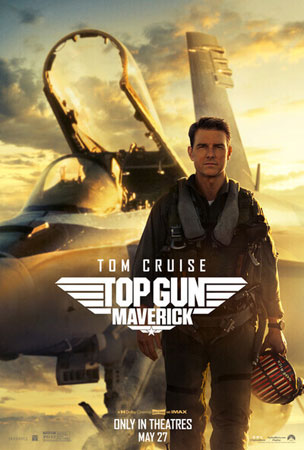 The makers of Top Gun – Maverick aim high and fly low. The strategy works. It ensures that they do not miss the target they – and lead actor Tom Cruise, back in the cockpit after a 36-year hiatus – have set for themselves.

Much has transpired since 1986’s Top Gun gave Cruise one of the first big hits of his acting career. This one, too, has the makings of a success, given the charm the actor exudes and especially since the film comes at the end of two difficult years for the whole world.

The follow-up, directed by Joseph Kosinski and written by Ehren Kruger, Eric Warren Singer and Christopher McQuarrie, may not exactly “turn and burn” like the trainee pilots in the film are exhorted to do, but it does manage to zip around pretty stylishly, effectively and, most important, entertainingly.

Cruise, who is pushing 60 in real life, is constantly on the ball as Pete “Maverick” Mitchell, a naval aviator who has refused to accept a promotion so as not to be pulled out of active flying action. Top Gun – Maverick imbibes some of that I-will-hang-in-there-no-matter-what spirit of the protagonist. It stays firmly on course and eschews unwarranted deviations although the emotional stakes at the heart of the story – for whatever it is worth – add some depth to the plot.

The drama plays out on multiple fronts. The principal one is of course about Maverick’s choppy relationship with the elite pilots who are summoned from their squadrons to be trained for a mission that is going to push them to “breaking point”. Their admiration, if any, for their reluctant teacher is at best grudging.

How Pete Mitchell draws them out of their crusty shells and carries them along as they launch an attack on a rogue mountain nation that is secretly enriching uranium in a plant hidden in a tough-to-access canyon. The mission is fraught with risk. Maverick is aware it could be his last.

Another thread of the plot – this bit injects doses of emotions into the proceedings – pertains to Maverick’s uneasy equations with Lieutenant Bradley “Rooster” Bradshaw, son of Goose, the fighter pilot who tragically met his end in Top Gun. Tensions between the two men reach fever pitch all too often, threatening to put paid to a mission that Maverick is under extreme pressure from his bosses to pull off.

A less crucial and yet eminently noteworthy strand revolves around Maverick’s attempts to revive his relationship with Penelope “Penny” Benjamin, with which the latter’s teenage daughter Amelia is perfectly fine. So, while Top Gun – Maverick is mostly about the relentless men – and a woman, Lieutenant Natasha “Phoenix” Trace – and their flying machines, the film does not stray too far away from the emotional and mental issues that the leader has to reckon with as he gets his wards ready and his superior out of the way for the mission. Sparks fly as Maverick has to strain every sinew to bring the trainee pilots under his wing to trust him.

Kosinski, who directed Cruise in Oblivion, takes the Top Gun legacy very seriously and puts the star at the centre of everything, does not bother all that much about plotting. The aerial action that he unleashes is consistently spectacular.

With the star of the show, no longer the spry young man he was in the mid-1980s, is acutely aware of the years that have gone by and incorporates the passage of time and its impact into the personality of the man he plays as well as into physical dimensions of the performance.

The word “time” is mentioned on several occasions. On one, Admiral Tom “Iceman” Kazansky, who can no longer speak, suggests that “there is still time”. Is there? What Top Gun – Maverick does impressively well is that it uses the charm of an ageing actor to propel a film that depends wholly on getting the harnessing of star charisma right.

Early in the film, Rear Admiral Chester “Hammer” Cain points towards the fact that pilots like Maverick might be on the verge of becoming a thing of the past. “Your kind is headed for extinction,” he says to Mav. The latter, unsurprisingly, is unflustered. “Maybe so,” he replies. “But not today.”

Just as old-world pilots who flew in their fighter jets to bomb targets, movie stars of yore who wielded the power to pull the audiences to the theatres to watch even ordinary films are an anachronism. Today, bombs can be remotely dropped on targets and, in the age of franchises, movies are no longer only about the stars headlining them but about also about “brand loyalty”.

In Top Gun – Maverick, Tom Cruise takes us back to the simpler times when he could make the sporting of aviator sunglasses feel like a cultural breakthrough and hopping into a cockpit look like an act meant to separate the men from the boys. Watch the film for its past. It is loaded with nods to the original Top Gun. Not that what it offers is in anyway stuck in an era gone by – the film flies confidently and sturdily to deliver a crackling good mainstream movie experience.