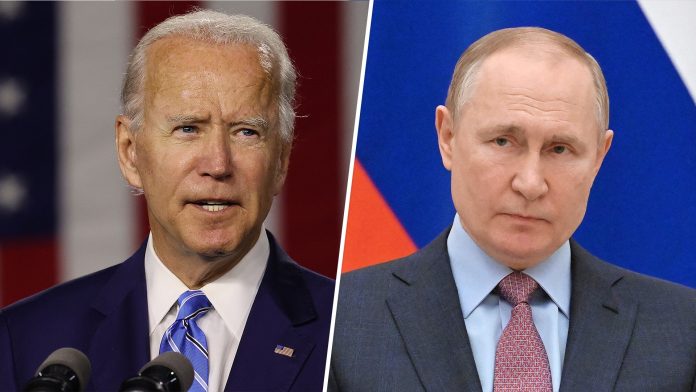 US President Joe Biden announced another package of military assistance for Ukraine on Friday as dozens of civilians were evacuated from Mariupol’s besieged steelworks, the last pocket of resistance against Russian troops in the pulverized port city.

Worth $150 million, the latest US security assistance for the “brave people of Ukraine” would include artillery munitions and radars, Biden said. A senior US official said it included counter-artillery radars used for detecting the source of enemy fire, and electronic jamming equipment.

Friday’s new batch brings the total value of US weaponry sent to Ukraine since the invasion began to $3.8 billion — and the president urged Congress to further approve a huge $33 billion package including $20 billion in military aid, “to strengthen Ukraine on the battlefield and at the negotiating table.”

Biden, other G7 leaders, and Ukraine’s President Volodymyr Zelensky, are to meet virtually on Sunday to discuss Western support for Kyiv in its struggle against President Vladimir Putin’s invasion.

Zelensky said more than 40 women and children had been evacuated on Friday from the Mariupol steelworks after spending two months in underground shelters and that “diplomatic options” were underway to “rescue our soldiers.”

The Russian defense ministry gave a figure of 50 civilians evacuated, including 11 children, saying they were handed over to the UN and Red Cross, which are assisting in the operation.

It said the “humanitarian operation” would continue on Saturday.

About 200 civilians, including children, were estimated to still be trapped in the Soviet-era tunnels and bunkers beneath the sprawling Azovstal factory, along with a group of Ukrainian soldiers making their last stand.

Russia announced a daytime ceasefire at the plant for three days starting Thursday but the Ukrainian army said Russian “assault operations” had continued by ground and by air.

Ukraine’s Azov battalion, leading the defence at Azovstal, said one Ukrainian fighter had been killed and six wounded when Russian forces opened fire during an attempt to evacuate people by car.

Azov battalion leader Andriy Biletsky wrote on Telegram on Friday that the situation at the plant was critical.

“The shelling does not stop. Every minute of waiting is costing the lives of civilians, soldiers, and the wounded.”

Ten weeks into a war that has killed thousands, destroyed cities and uprooted more than 13 million people, defeating the resistance at Azovstal and taking full control of strategically located Mariupol would be a major win for Moscow.

It would also be a symbolic success as May 9 approaches, the day Russia celebrates the Soviet victory over the Nazis in World War II.

Ukrainian officials believe Moscow is planning a May 9 military parade in Mariupol but the Kremlin denied any such plans.

White House Press Secretary Jen Psaki noted that the G7 meeting will come a day before “Victory Day” and the leaders will demonstrate “unity in our collective response” to “Putin’s war.”

“While (Putin) expected to be marching through the streets of Kyiv, that’s obviously not what’s going to happen,” Psaki said.

In Zaporizhzhia, an elderly woman, Olga Babich, recounted to AFP on Friday the daily bombardments of her village in southeastern Ukraine.

A tearful Babich reached into her battered car’s backseat to retrieve kittens from a basket covered with a tea towel. “I couldn’t leave them. They want to live and they are so tiny,” she said.

Moscow-backed separatists in southeastern Ukraine meanwhile said they had removed Ukrainian and English language traffic signs for Mariupol, replacing them with Russian ones.

Since failing to take Kyiv early on in the war, which began on February 24, Russia has refocused its offensive on the south and east of Ukraine.

Taking full control of Mariupol would allow Moscow to create a land bridge between separatist, pro-Russian regions in the east and the Crimean peninsula, which it annexed in 2014.

Elsewhere, a Ukrainian official said Russian forces had almost encircled Severodonetsk, the easternmost city still held by Kyiv, and are trying to storm it.

Kherson in the south remains the only significant city Russia has managed to capture since the war began.

A senior official from the Russian parliament visiting Kherson on Friday said Russia would remain in southern Ukraine “forever.”

“There should be no doubt about this. There will be no return to the past,” Andrey Turchak said.

Pentagon spokesman John Kirby said the US had “no prior knowledge” of the plan to strike the ship, which sank April 13, leaving a still-unclear number of Russian sailors dead or missing.

While providing Ukraine with military aid, the United States has sought to limit knowledge of the full extent of its assistance to avoid provoking Russia into a broader conflict beyond Ukraine.

Ukraine’s Western allies have supported Kyiv with financial and military assistance, and have slapped unprecedented sanctions on Russia.

In what would be its toughest move yet, the European Commission has proposed that all 27 EU members gradually ban Russian oil imports but Hungary rejects the ban.

The UN Security Council on Friday unanimously adopted its first declaration on Ukraine since Russia invaded on February 24.

It backed Secretary General Antonio Guterres’s efforts to find a “peaceful solution” to the war but stopped short of supporting a mediation effort led by him.

Russia then vetoed a resolution condemning the invasion and asking Moscow to move its army back to Russian soil.

A new UN-led rescue mission is under way to evacuate the last civilians still trapped inside a besieged steel plant in Mariupol that has become the devastated city’s final holdout against Russian forces, Ukraine says.

About 200 civilians, including children, are estimated to remain in hiding in the Soviet-era tunnels and bunkers beneath the sprawling Azovstal factory, along with hundreds of Ukrainian soldiers.

Ukraine says that Russia is pressing on with “assault operations” on the Azovstal plant.

“The blockade of (Ukrainian) defence forces in the Azovstal area continues,” said a Kyiv army spokesman in a video.

The Russian military had announced a three-day ceasefire starting Thursday at Azovstal.

President Vladimir Putin says the Russian army is “still ready” to give safe passage to civilians trapped there.

“As for the militants remaining at Azovstal, the Kyiv authorities must give them an order to lay down their arms,” the Kremlin quotes Putin as saying.

Moscow-backed separatists in southeastern Ukraine say they have taken down traffic signs spelling out the name of Mariupol in Ukrainian and English and replaced them with Russian ones.

Russian forces have for weeks sought to wrest full control of Mariupol, which has been destroyed in the onslaught.

Von der Leyen has said the bloc would “phase out Russian supply of crude oil within six months, and refined products by the end of the year”. Hungary and Slovakia — both highly dependent on Moscow’s oil exports — would have until the end of 2023.

“I avoid the word ‘veto’,” Orban, who has cultivated close ties with Putin, says on state radio, adding the proposal “has been returned to sender, to Madame President, to work on further”.

The US Defense Department denies providing intelligence on the locations of Russian generals on the battlefield so that Ukrainian forces could kill them.

“We do not provide intelligence on the location of senior military leaders on the battlefield or participate in the targeting decisions of the Ukrainian military,” Pentagon spokesman John Kirby says, responding to an explosive New York Times report on US support for Ukraine’s military.

But a US official, speaking on condition of anonymity, tells AFP that the United States does not “provide specific targeting information on ships”.

Chancellor Olaf Scholz’s government has been under fire for dragging its feet on arming Ukraine compared to other Western allies.

Leaders of the world’s top industrialised nations will hold video talks with Zelensky on Sunday, a spokeswoman for the German government as acting G7 chair says.

In the Donetsk and Tavriya areas, “the enemy continues conducting active hostilities”, it says. Shelling also continues in the town of Lyman in the Donetsk region.

Moscow is seeking to establish “full control” of the regions of Lugansk and Donetsk, and to maintain a land corridor to occupied Crimea.