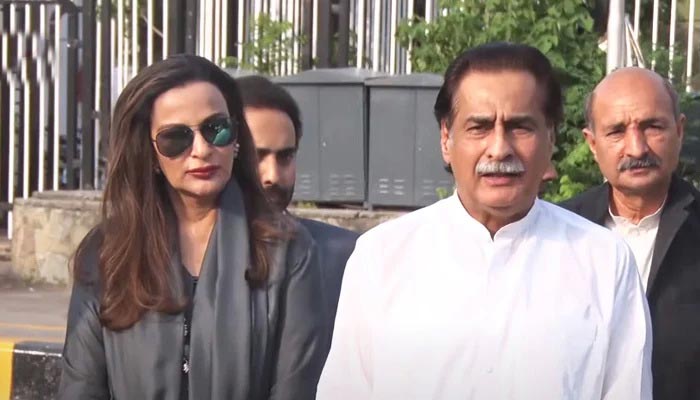 PML-N lawmaker and former speaker of the National Assembly, Sardar Ayaz Sadiq, on Wednesday called for placing the entire staff of the National Accountability Bureau (NAB) along with its chairman on the Exit Control List (ECL) for their alleged corruption during the PTI-led government.

Talking to the media in Islamabad, Sadiq accused the accountability watchdog of turning a blind eye to the wrongdoings of the then PTI government and targeting their rivals. Senior PML-N leader Shahid Khaqan Abbasi had on Tuesday also voiced similar sentiments against the NAB and urged his party’s newly elected government to dissolve the Bureau and hold its employees accountable.

At a press conference on Wednesday, Sadiq said NAB was wrong to believe that it could go scot-free for all its “malpractices”. “We were always sure of a nexus between Imran Khan and the NAB, and this connection proved true with time.” He also demanded that an investigation into the extravagant lifestyle and “living beyond means” of all NAB officials should be conducted.

Ayaz Sadiq alleged that the NAB had turned a blind eye to the wrongdoings of PTI government and instead targeted their rivals. They believed that there was a nexus between the PTI leadership and NAB, and it had now been proved, he added. Ayaz Sadiq claimed that the Pakistan Tehreek-e-Insaf (PTI) did not intend to quit the assemblies, rather it was creating a fake impression on the issue. He said there was a proper procedure to submit a resignation, which included appearing in person before the National Assembly speaker. “Resignations are not given the way the PTI members have submitted theirs. They deliberately avoided rules for the process.”

He said Imran Khan was “forcefully” taking resignations from his part’s lawmakers in the National Assembly. He said Khan was forcefully asking lawmakers to resign and submitting their resignations to Deputy Speaker Qasim Suri. “In line with the law, every member should appear in person and submit their resignation to the speaker […] there are some conditions and questions that are noted before the acceptance of the resignation,” the MNA said.

Sadiq claimed the PTI members were pressurised into signing cyclostyle documents, which included their names and constituency. “It is clearly stated in the rules that a lawmakers resignation should be handwritten.”

Moving on, he said he had personal issues with the PTI chairman as he had beaten him two times in elections. Sadiq added that after Khan had challenged his election in 2015, he had won and retained the seat in the by-election. “…and the no-confidence motion against Khan was also completed through me,” the ex-speaker, who chaired the session for the voting on the no-confidence motion, said.

To a question about the reservations of Muttahida Qaumi Movement-Pakistan, the PML-N leader said the MQM-P was a part of the government and their agreement in that regard was in place.

For her part, PPP Senator Sherry Rehman said the deputy speaker was pressurising the National Assembly secretariat on the issue of the resignations. “The deputy speaker is violating the laws […] Suri had said that he identified the members based on their signatures, but according to the rules, every member should be present in person for submitting their resignations,” Rehman said. The PPP senator said several PTI lawmakers were contacting the Opposition parties to express their reservations over Imran Khan’s policy of taking resignations forcefully. Lashing out at the PTI for not following the Supreme Court and the Islamabad High Court’s orders, Rehman urged the Election Commission Pakistan (ECP) to take notice of the party’s action. “This politics of burning property down and dividing will not work anymore,” she added.