Dictionary.com anoints ‘allyship’ word of the year for 2021

* 'It might be a surprising choice for some,' he told journalists ahead of Tuesday's unveiling 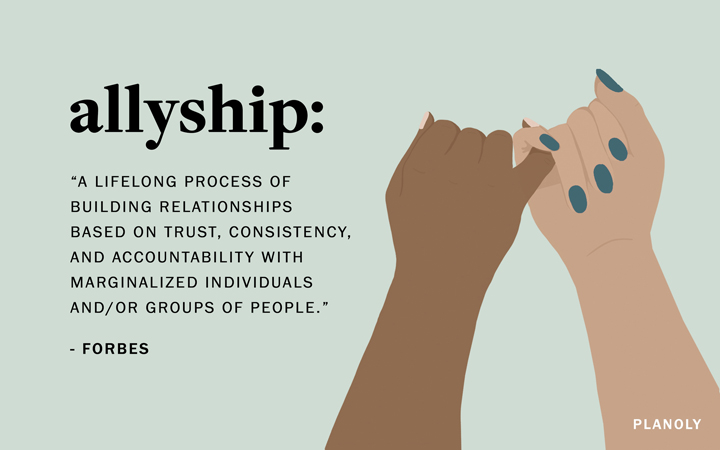 Allyship, an old noun made new again, is Dictionary.com’s word of the year.

The look up site with 70 million monthly users took the unusual step of anointing a word it added just last month, though “allyship” first surfaced in the mid-1800s, said one of the company’s content overseers, John Kelly.

“It might be a surprising choice for some,” he told The Associated Press ahead of Tuesday’s unveiling. “In the past few decades, the term has evolved to take on a more nuanced and specific meaning. It is continuing to evolve and we saw that in many ways.”

The site offers two definitions for allyship: The role of a person who advocates for inclusion of a “marginalised or politicised group” in solidarity but not as a member and the more traditional relationship of “persons, groups or nations associating and cooperating with one another for a common cause or purpose.”

The word is set apart from “alliance,” which Dictionary.com defines in one sense as a “merging of efforts or interests by persons, families, states or organiSations.”

It’s the first definition that took off most recently in the mid-2000s and has continued to churn. Following the summer of 2020 and the death of George Floyd, white allies – and the word allyship – proliferated as racial justice demonstrations spread. Before that, straight allies joined the causes of LGBTQ oppression, discrimination and marginalization.

“This year, we saw a lot of businesses and organizations very prominently, publicly, beginning efforts to promote diversity, equity and inclusion. Allyship is tied to that. In the classroom, there is a flashpoint around the term critical race theory. Allyship connects with this as well,” Kelly said.

Without an entry for “allyship,” Kelly said the site saw a steep rise in lookups for “ally” in 2020 and large spikes in 2021. It was in the top 850 searches out of thousands and thousands of words this year. Dictionary.com broadened the definition of “ally” to include the more nuanced meaning. The terms “DEI” and “critical race theory” made their debuts as entries on the site with “allyship” this year.

What it means to be an authentic ally has taken on fresh significance as buzz around the word has grown louder. One of the aspects of allyship, as it has emerged, is how badly it can go.

Among the example’s of how to use the word in a sentence cited by Merriam-Webster is this one written by Native activist Hallie Sebastian: “Poor allyship is speaking over marginalized people by taking credit and receiving recognition for arguments that the unprivileged have been making for their entire lives.”

As global diversity, equity and inclusion executive Sheree Atcheson wrote in Forbes, allyship is a “lifelong process of building relationships based on trust, consistency and accountability with marginalized individuals and/or groups of people.” It’s not, she said, “self-defined – work and efforts must be recognized by those you are seeking to ally with.”

Allyship should be an “opportunity to grow and learn about ourselves, whilst building confidence in others,” Atcheson added.

Among the earliest evidence of the word “allyship,” in its original sense of “alliance,” is the 1849, two-volume work, “The Lord of the Manor or Lights and Shades of Country Life” by British novelist Thomas Hall: “Under these considerations, it is possible, he might have heard of Miss Clough’s allyship with the Lady Bourgoin.”

Kelly did some additional digging into the history of allyship in its social justice sense. While the Oxford English Dictionary dates that use of the word to the 1970s, Kelly found a text, “The Allies of the Negro” by Albert W Hamilton, published in 1943. It discusses extensively the potential allies of Black people in the struggle for racial equality:

“What some white liberals are beginning to realize is that they better begin to seek the Negro as an ally,” he wrote. “The new way of life sought by the liberal will be a sham without the racial equality the Negro seeks. And the inclusion of the Negro in the day-to-day work, in the organization, the leadership and the rallying of the support necessary to win a better world, can only be done on the basis of equality.”

On the other side of allyship, Kelly said, “is a feeling of division, of polarisation. That was Jan. 6.” Allyship, he said, became a powerful prism in terms of the dichotomy at a chaotic cultural time during the last two years.

Other dictionary companies in the word of the year game focused on the pandemic and its fallout for their picks. Oxford Languages, which oversees the Oxford English Dictionary, went for “vax” and Merriam-Webster chose “vaccine.” The Glasgow, Scotland-based Collins Dictionary, meanwhile, plucked “NFT,” the digital tokens that sell for millions.

While Merriam-Webster relies solely on site search data to choose a word of the year, Dictionary.com takes a broader approach. It scours search engines, a broad range of text and taps into cultural influences to choose its word of the year.