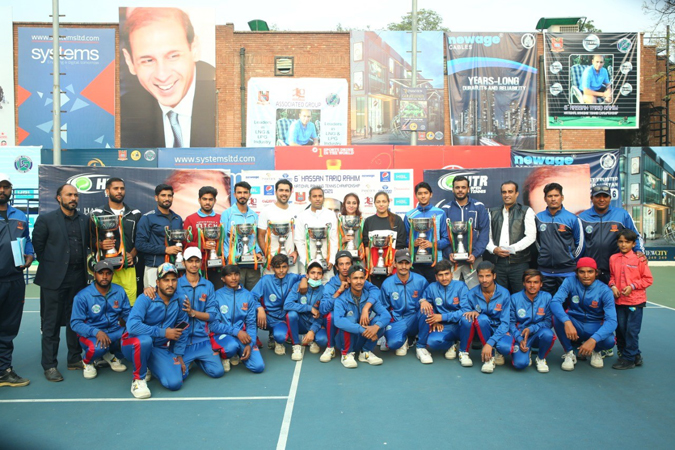 LAHORE: The 6th Hassan Tariq Rahim National Ranking Tennis Championship came to a cessation after a splendid and illustrious final day of tennis flurry and liveliness at the Lahore Gymkhana Tennis Courts here on Sunday. Muzamil Murtaza defeated Muhammad Shoaib in the men’s singles final to lift the title. The duo stirred the fans and avid gathering with their truculent play and on court upscale hitting. The first set was mastered by Shoaib who rallied with composure and authority and successfully subdued Murtaza, winning the set 6-4. In the second set, however, Murtaza upgraded his returns and embossed more authority in his strokes. Murtaza won the second set 6-4 and thereafter it was time for his ascendancy. The third set turned out to be an indifferent one for Shoaib who found Murtazain a consummate and dexterous mood and his command over the flow of the game was all forceful and sturdy. Murtaza emerged as the ingenious one with scores of 4-6,6-4 and 6-1.His performance was wondrous and superb and commendable was his all round game.Noticeable was his athletic fitness. In the men’s doubles final,the pair of Aisamul Haq Qureshi and Aqeel Khan amazed with their exceptional and outstanding movements and defeated Muhammad Abid and Waqas Malik 6-2 and 6-4.No doubt Aisam looked physically and mentally blooming and his footwork and balance allowed him to stay razor sharp.For tennis players, his presence was captivating.

Early in the morning, women’s finalists Ushna Sohail and number one ranked Sara Mehboob battled it out for the coveted trophy. Although expectations were that the encounter would be closely fought out but Ushna had chalked out her own game plan which worked with preciseness and exactitude.And all through the two sets, Ushna surfaced in an imperious and forceful way leaving her opponent appalled and astounded. Ushna’s serves were traumatic and adequately backed by finest shot making. Undoubtedly Ushna played assertive and energetic tennis and emerged victorious with score chart reading 6-0 and 6-3 making her look dauntless and impregnable. An appealingly and elegantly organised tennis championship by Waqar Nisar, Furqan Khan and the tennis playing members of Lahore Gymkhana with Khawaja Tariq Rahim as the focal figure. The winners were honoured by celebrated and prominent ones like Mian Misbahur Rehman, Sarmad Nadeem, Wajid Aziz and tennis playing ardent ones.