* PDM chief says rallies, protests and wheel-jam strikes will be held across country 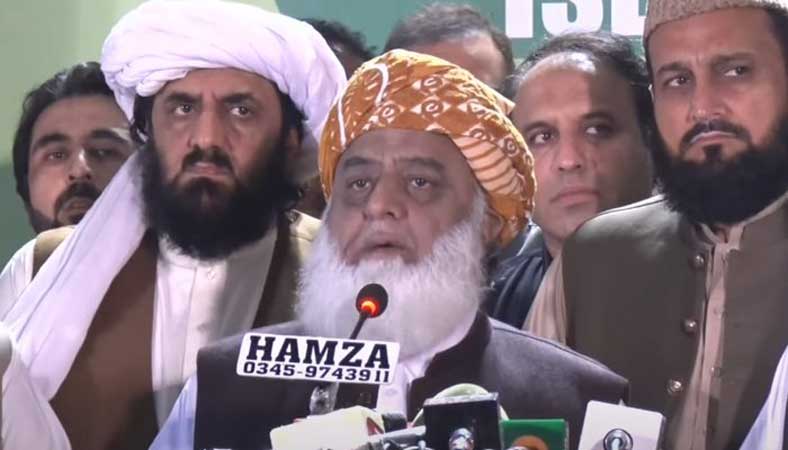 Speaking to the media in Islamabad, he said, “Our demand is to hold a general election.” He said unless there are transparent general elections in the country, there is no justification to hold local government elections. He announced that there will be rallies, protests and wheel-jam strikes starting from October 20. “PDM wants a democratic and constitutional system in the country,” he said. “We have to work hard and stand firm, the result is in the hands of Allah.”

Rejecting the electoral reforms, Rehman said that the electronic voting machine (EVM) is another name for the old results transmission system (RTS). “The government which has come into power as a result of rigging has no right to give a formula for free and fair elections in the country,” the PDM chief said.

Earlier, the PDM held a meeting, presided over by Fazlur Rehman. A well informed source belonging to the PML-N told this scribe while wishing anonymity that the option of no-confidence motion against Prime Minister Imran Khan also came under discussion in the parliamentary committee meeting of the party as well as in the PDM meet-up. “But it has not been finally decided yet,” he said. While talking to Daily Times, PDM spokesman Hafiz Hamdullah confirmed the move. “It was informally discussed during the PDM meeting but we will not be part of any such move as it’s not in favor of democratic norms,” he clarified.

Earlier in the day, Leader of the Opposition in National Assembly Shahbaz Sharif lamented the recent hike in prices of essential commodities and petroleum products, saying that the PTI-led government has snatched people’s right to live.

Addressing the NA session, chaired by Speaker Asad Qaiser, the opposition leader said “every child in the country is bearing witness to the worst government in the last 74 years.” Further criticizing the PTI-led government’s economic policies, Shahbaz Sharif said that there is no comparison between PTI’s governance and Riyasat-e-Madinah. “As against present-day Pakistan under PTI’s rule, no one ever slept hungry in Riyasat-e-Madinah, exemplary justice prevailed there, and everyone was given their due rights,” he pointed. Shahbaz reminded Prime Minister Imran Khan that he had, before coming into power, said that if the rupee’s value falls against the dollar, then the prime minister is a thief. “If the price of medicines has risen by 100 percent, then what should we call this government. The NA proceedings could not continue due to lack of quorum.