* The movies in which I assisted music composer A Hameed were 'Naik Parveen' and 'Haqeeqat,' stated Qadir Ai Shaggan when we last met 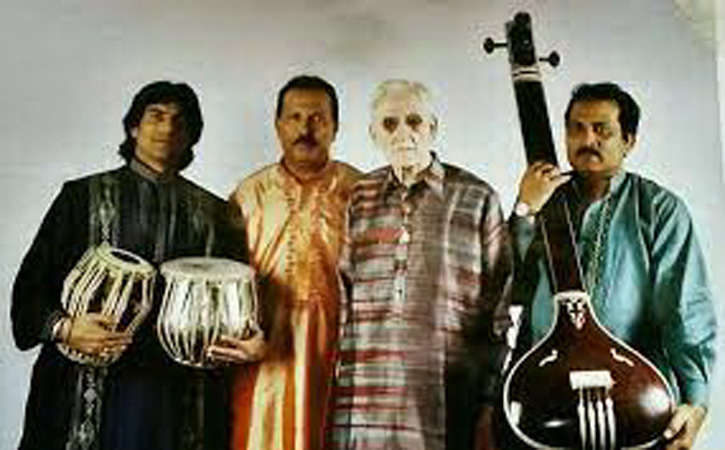 He did become a classical vocalist but also became a music composer at the same time. The latter interest was developed merely of Qadir giving assistance to stalwarts like Rasheed Attre, A. Hameed, Master Rafique Ali, Safdar Hussain and Wajahat Attre. News of his demise came as a shock to me who know him personally since decades.

The movies in which I assisted Music Composer A Hameed were ‘Naik Parveen’ and ‘Haqeeqat’ stated Qadir Ai Shaggan when we met last. For Master Rafique Ali the movies were ‘Dillagi’ and ‘Saiyan Anari’, for Wajahat Attre it was ‘Naukar Wohti Da’. I can recall only these names offhand. I have though assisted these big names in many other movies also’, Qadir spoke of his passion for music composition to me some times ago at PTV, Lahore Centre.

Qadir has given independent music for about sixteen to seventeen movies, which were released, and in many that were not. It was 1978 onwards when at a very young age; he gave music for his first movie ‘Yaari Dosti’. Not looking back he remained busy in the film studios where he gave music for ‘Qasam Khoon Di’, ‘Qatil Tey Farishta’, ‘Jeero Badnam’, ‘Remand’, ‘Sohni Dharti’, ‘Sarkari Order’, ‘Rab Tey Maan’, ‘Double Cross’, ‘Zid Baazi’ and ‘Saude Baazi’. ‘My last movie released three to four years ago was ‘Ik Din Sheher Da’. I have given music for the crooners Madam Nurjehan, Naheed Akhtar, Mehnaz, Rajab Ali, Ghulam Abbas, Afshan and Mala Begum in these movies. It has been a wonderful experience so far. I may do some more work for the movies once I get time out from my TV and Radio recordings that have kept me busy since past few years’ stated Qadir about his schedules.

Qadir Ali Shaggan hails from the Gowaliar Gharana of classical music. He was taught classical vocalization from his childhood as expected from the great father and Grandfather Bhai Laal Muhammad Sangeet Sagar. ‘My grandfather only made me sing ‘Sa Re Ga Ma…’ of some Raags before he died in 1962. I was a child then. I rendered Raag Bhairon in Mohni Hameed’s children programme ‘Honhaar’ at Radio. Singing for Radio Pakistan in those days was and even now is taken as the ultimate for a classical singer as far as his performance is concerned. That is because of the strict approval business after audition by experts. The arduous task of giving me training was then taken over by my father. My first performance as a classical vocalist was with my father at my grandfather and Alamgir Khan’s anniversary at Vyam Shala, Lahore. Since then I have not looked back. I have performed with my father at TV, Radio, Art Councils, All Pakistan Music Conference and many other forums. The best part is that my father does not believe in repeating a Raag at PTV. That is why my repertoire as a classical vocalist has broadened over my lifetime’ spoke Qadir of his performances as a classical singer. The last I saw him busy was in Muhsin Jaffer’s music series ‘Firdaus Gosh’ giving his professional opinion at PTV. Then he was fairly active in Sachal Studios recordings by Izzat Majeed.

It is Qadir’s command over many Raags that I have witnessed during Qadir’s compositions made for this scribe for the producer Agha Zulfiqar Khan’s programme ‘Ghazal Sarae’ that he made ghazal compositions in the Raag that the poetry’s mood demanded. They were generally melodious tunes rendered by nearly all ghazal singers who can render ‘live’ recordings. Qadir Ali Shaggan was Madam Farida Khanum’s choice for her music series titled ‘Taghazul’ in the nineteen eighties. He composed for Shahenshah Nawab’s seven programmes. This series by Farida Khanum was then taken over by music composer Akhtar Hussain Akhian. Composing for Farida Khanum who demands a lot of time for rehearsals and then recordings was not an easy task. Qadir came to PTV just by chance in 1979 to sing as a light classical singer. He did that for Mushtaq Soofi’s ‘Lok Ras’ and is occasionally singing a song at PTV also as a light singer but his main activities are for the classical music programme titled ‘Raag Rang’ as long as it lasted with his father and music compositions for various programmes.

About his association with various PTV’s music producers, Qadir told this scribe that he has worked with most of the producers. He made however special mention of programmes ‘Sada-e-Dost’, ‘Ghazal Sarae’, ‘Mela’, ‘Panjnad’ and ‘Sajri Rut’ for Agha Zulfiqar Khan, ”Dhanak’ and ‘Awaz-o-Andaz’ for Farrukh Basheer, ‘Programme on Quiad-e-Azam’, ‘Youth Rang’, ‘Ghazal Us Ne Chairi’ and ‘Wadi-e-Kashmir’ for Shaukat Zain ul Abedin, Eid Show in which Ibrar ul Haq and Nadia Khan were the comperes for Hafeez Tahir and ‘Ujalon Ka Safar’ for Ayub Khawar. About the programme ‘Ujalon Ka Safar’ it may be mentioned that it used to include two Nazms in each episode from ‘Shahnama-e-Islam’ by Hafeez Jallundhri. Qadir did music composition for fifty-six episodes and used a different Raag for each composition. He claims to have used 112 Raags in the process. Producer Zulfiqar Ahmad later produced this programme.

Though Qadir has accompanied his father and brother Mazhar Ali Shaggan who plays the instrument ‘Rubaab’ to many European countries where they have performed for only the foreign audience, like in France, Holland, Belgium, Switzerland and Spain in 1999 and 2000. He has not taken liking to the Pop Music as its stands in our country today. He finds it noisy. He believes that all the Pop singers should first get training in the basics of classical music, then go for whatever they are doing.

Qadir’s father Ustad Ghulam Hassan Shaggan was born in 1928 and is still going strong at the age of seventy-four in his ‘Taans’ while singing classical music. Gowaliar Gharana of classical rendition is famous for names like Mian Taan Sen, Mian Haddu-Hassu Khan, Rehmat Ali and Hassan Khan. They use the exact ‘Matras’ of the beat to render the ‘Asthai’ and ‘Antara’. They are famous for their ‘Moti Daane Wali Taan’. With a living academy in his house in the form of his father, Qadir makes it a point to get all his compositions whetted from him. With all these ingredients one expected anything but an excellent output from Qadir Ali Shaggan. His works shall keep him alive for music lovers. May his soul rest in peace. Ameen!