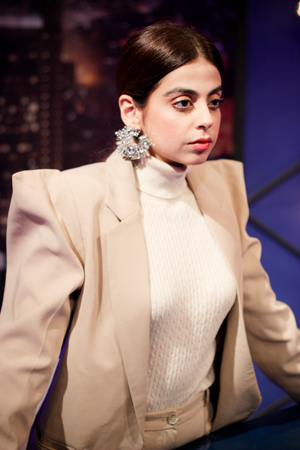 ‘Azmaish’ was a drama that garnered a lot of fan following because of its enticing storyline and exceptional performances by the lead characters.

Now that the drama has come to an end, we have seen how much people loved Nimra and Basit’s love story throughout, but we also saw they loved to hate Shiza, the person bringing so much negativity in their lives, for which the credit goes to Yashma Gill’s acting skills. Yashma played a negative role in the drama and nailed it perfectly with her on-point expressions right till the very end.

The storyline, which was almost too dramatic to be clichéd, saw an interesting end as the drama ended with the death of the character that stole the show one too many times, the mean step-sister Shiza, whom Yashma Gill had brought to life. It is kind of ironic to note that the drama came to an end with the death of Shiza – which is also kind of symbolic. Throughout the drama, Shiza went through many different feelings and changes, but what remained consistent throughout was her hate and determination, and the credit goes to Yashma Gill for that.

As all the characters grew, we saw that SHiza matured too. She started to see things she couldn’t in the past – and she kept acting on them, it is a difficult transition to achieve and the challenge is to make it look as natural as possible. Yashma Gill did so with ease. Yashma Gill has always been a powerhouse performer and every time we see her in a drama, we know she is never going to disappoint. While Azmaish has ended, we are looking forward to whatever the actress will decide to do next. We know that any project she takes will benefit from her and there is nothing more we’d love than to watch this dynamic actress grow even more!