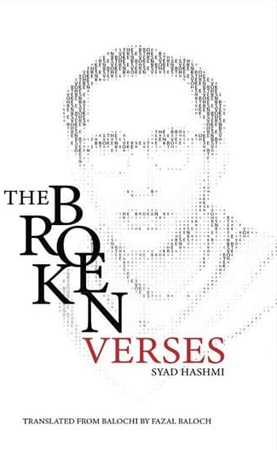 Syed Zahoor Shah Hashomi was a dynamic and an indomitable figure of Balochi literature.

His area of study ranges from criticism, linguistic, lexicography, novel, short stories, letters and many more. He was a dedicated man and served Balochi to last of his breath. He burned the midnight oil to compile the first Balochi to Balochi dictionary known as Syed Ganj. He also jotted the first Balochi novel known as Nazuk which was initially a short story about the social problems of coastal region Gwadar. Nazuk was first published in 1976.

Sistagin Dastoonk, in English Broken verses, was translated by one of the finest translators of Balochi language Fazal Baloch. The translated version of Sistagin Dastoonk is Broken verses and was lately published by Balochi academy Quetta in 2021. The translator Fazal Baloch is a regular translator and he has translated a number of Balochi poems, short stories into English which have been featured in various magazines and anthologies. His translations are more often than not literary translations but over the course of his translations one feels some tinges of technical translation as he hankers to grasp the very essence of the poem and render that into an English ambience. This becomes a daunting challenge for him and he resorts to technical patterns, thereafter. Notwithstanding in this book his translation is quite simple and literary.

Furthermore, Syed, in this book indites his ideas in an unadulterated Bloch so much so that it becomes jolly challenging for a novice to virtually grasp the essence of the idea. However, in broken verses he is incredibly simple and unequivocal. The prime cause to write in this inchoate form was to review the perennial wrongs taking firm roots in an already blighted society and that being taken as an insipid fashion; then perpetuating those without any serious cogitation.

Furthermore, Syed, in this book indites his ideas in an unadulterated manner so much so that it becomes challenging for a novice to virtually grasp the essence of the idea. However, in The Broken Verses, he is incredibly simple and unequivocal

From time immemorial Baloch society is running around a pure traditional set up. This set up solely identifies those things which are Balochi. By Balochi I suggest an indisputable ambience which fosters and then unquestionably embraces them. No denying the fact that cultures do not merit any kind of extraneous force to fray the fabric of very foundations on which culture outstands. Culture is a very abstract phenomenon and Baloch culture as a social phenomenon is quite near German idea of culture.

Germany is known as land of thinkers, poets and philosophers. German culture is heavily influenced by religion, composers and writers. Three cardinal things that constitute German culture are: the people, language and traditions. The same goes for Baloch culture. On the contrary to German French are inclined towards civilisational bonding. A German is always thrifty, sensible and respect one another’s privacy. You cannot violate a private matter of a German at the expense of something larger than private, i.e., civilizational unity.

As per me, Syed in Broken verses is more on the pole of individuality and is trying to strike a chord amongst so many social maladies. He is worried about the docility of his nation. The resolve and steadfastness should invariably be intact. Broken verses are the maiden production of this amorphous form in Balochi. However, there are several examples of such works in other languages, i.e., Urdu, English and many more.

Sistagen Dastoonk or the Broken verses was originally published in 1957 in the harsh days when things were not smooth sailing. The book is divided into three parts; Dastoonk or verses, Passaw or replies and Misken Dagar or the fragment earth. Syed more often than not laments the poor condition of Balochi language and its seclusion in the book. He also writes his own experiences as he had travelled many places and had met people of variegated categories.

“Some quip me a mad

It is my only sin

The lampoonery Syed has here employed is quite hurting. In Pakistan if one is fluent and mellifluous in English is tagged as a well-educated man. Punjabi language seems to be on a very teetering position inasmuch as many Punjabi waver to speak in their mother tongue envisaging it wild.

But it is the sign of haughtiness and this is highly deplorable. Syed fostered the idea that you should feel proud to speak in your own language and if people tag you as a lunatic and mad don’t even give them a hang. Ignore them. In the similar fashion, Syed snaps back and quips those who loathe their mother tongue:

That you end up dragging your own feet.”

“A friend told me:

‘I am going to tie the knot with so and so’

‘She has a tainted past’

In traditional set ups onus of every great misdeed is laid upon women and men is shrugged off the screen or provided with some other extenuating circumstances to emerge innocuous.

Syed here raises genuine questions to those people who raise shoddy questions on someone’s dignity. But such types of people have mendacious character and encourage the entire society to run down their tawdry path.

This book is a great read in many ways. With some pithy and succinct aphorisms it affords you perennial lessons of life. Here the egregious and dark underbellies of politician, literary quacks and sordid leaders are unleashed in a simple pattern of a few words. Syed does not obfuscate and dilly-dally he hits the bull’s eye and kills two birds with one stone.

I will quote here a few thought provoking and mind boggling aphorisms.

1: We need not your palaces…. Don’t set out huts on fire

We need not your castles…. Don’t raze our mountains

We need not your godowns…. Don’t destroy out pastures

We need not your ships… Don’t dismantle our boats

We need not your planes…. Don’t slay our camels

We need not your armours…. Don’t break our arms

The Divine spirit may curse you.

2: Fathomless is the sea of helplessness

Why don’t you sport beards?

I can’t hide myself behind them

Yes, for the sake of manners.

4: A man is liberated

Only when he falls into another

“So and so has set everything on fire”.

“He will burn himself.”