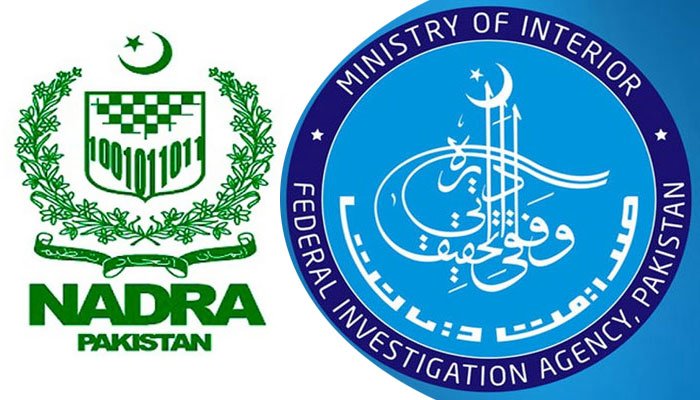 A court in Karachi has given access to the Federal Investigation Agency (FIA) physical remand of three people, including a National Database and Registration Authority (NADRA) official, in a fake identity cards case.

The FIA had arrested the three suspects on July 14. Data Entry Operator of NADRA Mega Centre, DHA, Karachi Muhammad Moosa Abbasi, Muhammad Ameen, who had obtained a forged CNIC, and agent Meraj.  A total of 13 suspects have been taken into custody so far, including NADRA officials, non-nationals, and agents allegedly involved in the forge.

The FIA had presented the three suspects before the court of Judicial Magistrate East, during which they revealed before the court that one of the suspects had obtained an NIC whose serial number was already registered to another person.

“There is a difference of nine years between the suspect and his father’s age, which is unnatural,” the FIA officials told the court, adding that it needed more time to probe, and for that, remand should be awarded.

The court, granting the remand, demanded the FIA present a progress report at the next hearing. The development comes nearly a week after (FIA) Sindh Director Amir Farooqi had revealed that two NADRA officials both assistant directors  had been arrested for issuing NICs to “militants and others for achieving some illegal gain.”

The FIA Sindh director, addressing a press conference in Karachi, had said the officials — in exchange for money — had issued fake NICs to militants associated with Tehreek-i-Taliban Pakistan (TTP), Al-Qaeda, and other banned groups.

Minister of State for Parliamentary Affairs Ali Muhammad Khan, speaking at the Senate on Friday, had informed the house that NADRA had suspended 39 officials and lodged FIRs against another 10 personnel on reports of alleged corruption in the Karachi office.

The minister’s statement came after Senator Faisal Ali Subzwari drew the attention of the minister of the interior towards the fake CNICs issued by NADRA.

Khan said reports of issuing fake CNICs to a large number of people were not true, however, the investigation team was probing the matter and the NADRA remained vigilant.

The minister said that there was a set procedure of issuing CNICs to eligible citizens after thorough confirmation through different means like fingerprints, personal appearance, submission of certificates, and authorised officers’ letters to ensure authenticity.