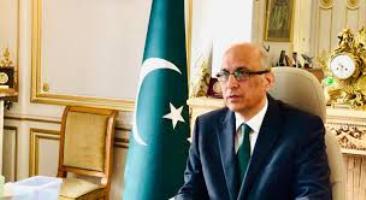 BEIJING: The Pakistan-China friendship has grown even stronger under the present leaders of two countries.

“It is encouraging to see that the friendship has grown even stronger under the present leadership of our two countries. Imran Khan is keen to further develop that bond and has visited China thrice since assuming office in 2018,” he said in an article published by Beijing Review.

President Xi, in turn, is keen to intensify strategic ties with Pakistan. During his 2015 visit to the country, the bilateral ties were upgraded to an all-weather strategic cooperative partnership.

During this particular visit, Pakistan and China launched various new projects of the China-Pakistan Economic Corridor (CPEC), one of the biggest projects under the Belt and Road Initiative. Of these undertakings, many have already been completed while others are at different stages of finalization.

Pakistan is completely committed to the CPEC and the Belt and Road Initiative and is ready to take this initiative to new heights as aspired by both nations’ peoples.

“We are proud of the special attention President Xi and the CPC pay to the solidification of the Pakistan-China rapport and look forward to further consolidating our iron-clad brotherhood,” he wrote.

This year also marks the 70th anniversary of the establishment of diplomatic relations between Pakistan and China. It is a special occasion to rejoice in our past achievements, renew our firm determination to continue this journey of friendship and elevate it to a new pedestal of bilateral cooperation.

The Pakistan-China relationship has negated the notion that bilateral ties are merely the result of convergence of political interests.

On the contrary, we have demonstrated that the underlying forces driving strong international cooperation are those of mutual respect and understanding, the common experiences of the past, the adherence to international norms and values, and the sincere desire to work together for a transparent and just international system catering to the legitimate interests of all nations without any discrimination.

He said, the year 2021 celebrates the 100th anniversary of the founding of the Communist Party of China (CPC) and thus is an apt occasion to remember its innumerable services and countless sacrifices for the prosperity and progress of China and its people.

The CPC, established in July 1921, is the world’s largest political party. It is credited with the founding of the People’s Republic of China in 1949, thus signaling the advent of a new age in Chinese history.

In the last 70-plus years, the CPC and its leadership have surmounted intractable domestic and international challenges with indefatigable energy, wisdom and foresight. In the face of any crisis, the Party has refreshed its spirit, redefined its role and emerged stronger.

Under the CPC’s leadership, China has achieved major accomplishments across all walks of human efforts unprecedented in the annals of world history.

In just four decades, since the beginning of reform and opening up in 1978, it has made massive headway in socioeconomic development, industrialization, science and technology with notable achievements in 5G, big data, quantum computing and artificial intelligence.

Today, China is leading global efforts for the mitigation of climate change and exploring new frontiers in aviation, space and medical sciences. The attainment of the first centenary goal of becoming a moderately prosperous society in all respects has taken it one step closer to materializing the dream of the Chinese nation’s great rejuvenation.

Of all such achievements, the CPC’s most enduring service to humanity has been the lifting of 800 million citizens out of absolute poverty. Its successful strategy of inclusive and sustainable growth, through which all sections of society, freed from the fear of gloomy poverty, can contribute to national development efforts, has proven that poverty is not ordained in humanity’s destiny and that it can be eliminated through concerted and sustained efforts.

The CPC also deserves credit for the deepening of the Pakistan-China friendship, the envy of many, and a token of pride for the peoples of our two countries, he wrote.