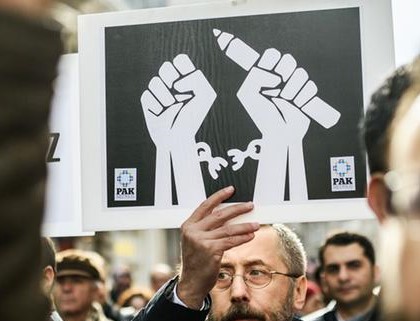 Dozens of reporters in Istanbul and Ankara rallied on Tuesday demanding protection from the police following the violent arrest of an AFP photographer during a banned Istanbul Pride event.

Award-winning photographer Bulent Kilic filed a “violent arrest” complaint against police officers who pinned him to the ground with their legs against his neck and back while he was covering the march on Saturday. He was released without charges after being taken to a police station for questioning. Dozens of Pride event protesters were also briefly detained. AFP chief executive Fabrice Fries “strongly protested” the incident in a letter urging Turkish officials to “swiftly investigate this incident and take the necessary measures so that the involved officers are held accountable”.

Dozens of journalists rallied near the Istanbul governor’s mansion on Tuesday holding photos of Kilic’s head pinned to the ground and signs saying: “We can’t breathe”. “Press freedoms cannot be silenced,” they chanted while some hung their cameras to the fence surrounding the governor’s mansion in protest. Many reporters in Turkey have drawn parallels between the manner of Kilic’s arrest and the killing of African American George Floyd by white police officers last year. Similar slogans rang out during an unsanctioned event attended by dozens of reporters in a park in the Turkish capital Ankara. “Our colleagues face violence for simply doing their job,” the Turkish Journalists’ Association’s Ankara branch head Esra Kocak Mayda said as anti-riot police observed a short distance away. Reporters Without Borders’ (RSF) Turkey representative Erol Onderoglu called on the government “to provide clear instructions for state security forces to end this unacceptable and unfair treatment before it is too late”.

Turkish President Recep Tayyip Edogan’s government comes under relentless criticism for stifling the media and political dissent. Reporters say their jobs became even more difficult after the Turkish police issued a circular in late April banning the dissemination of images or audio of officers without their consent. Bar associations are challenging the measure as unconstitutional. Turkey ranked 153rd out of 180 countries in RSF’s latest World Press Freedom Index.