ECP to be given practical demonstrations on EVM, I-voting mechanism: Fawad 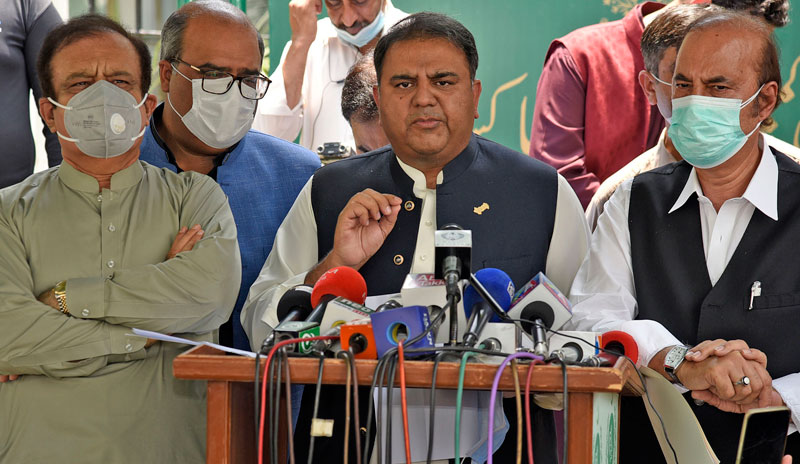 Minister for Information and Broadcasting Chaudhry Fawad Hussain on Monday said the departments concerned would soon give practical demonstrations/briefings to the Election Commission of Pakistan on the Electronic Voting Machine (EVM) and Internet-voting mechanism to ensure transparency in elections and give overseas Pakistanis their right to vote.

“By the grace of Allah Almighty, the upcoming elections of 2023 will be held under a new mechanism, which the Pakistan Tehreek-e-Insaf (PTI) government has presented to the ECP and the Parliament,” the minister said while talking to media persons after a meeting between a government delegation and the ECP officials on electoral reforms.

Accompanied by Advisor to the Prime Minister on Parliamentary Affairs Dr Babar Awan, Minister for Science and Technology, Senator Shibli Faraz and Special Assistant to the PM on Accountability and Interior, Barrister Mirza Shahzad Akbar, he said the meeting deliberated on four points including the Electoral Reforms Bill, EVM, Biometrics and I-voting.

After the demonstrations and briefings, he said, the ECP could appoint its own experts for further examination of the EVM and I-voting mechanism, if deemed appropriate by it.

However, the government would extend all cooperation to the ECP in that regard, he added.

Fawad said the government had presented the electoral reforms bill in the parliament in October last with the introduction of 49 amendments in the existing election process.

“We want legislation on these amendments in consultation with opposition parties, so that we can lead to such elections that will be acceptable to all,” he said.

Highlighting the importance of the EVM in fast and accurate compiling of the election results, the minister said it was a general observation that rigging allegations were mostly leveled during a certain time, between the polling-end and result-announcement.

“Our effort is to end these allegations with the introduction of EVMs.”

He expressed happiness that the ECP had welcomed the use of EVMs in elections as the commission believed that the usage of modern technology was a ‘positive step’ towards making the election process transparent. “It (ECP) wants to move on it.”

Commenting on the I-voting, the minister said giving the right to vote to overseas Pakistanis was one of the top agendas of the PTI government.

With this system, he said, around eight to nine million overseas Pakistanis would be able to exercise their right to vote, who were playing a vital role in strengthening the national economy.

“Accordingly, we have presented a comprehensive report to the ECP. Besides, the ECP has received a report on I-voting from an independent consultant.”

He said all technologies with regard to the EVM were in hand and all manufacturers were busy in production of the EVMs.

The minister said the ECP had regretted over a fake post appearing on its social media account, saying that it was due to some misunderstanding and mistake of an internal department.