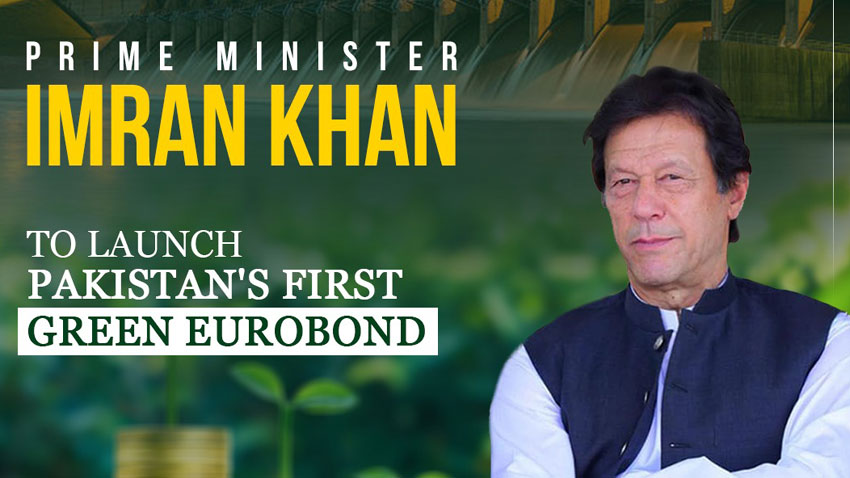 The bond has been floated for 10 years to raise $500 million at a competitive price of about 7.5 percent interest rate.

The prime minister lauded Chairman Wapda and his team for the landmark achievement of securing bonds in the international market, at a launch ceremony held at the PM House. Imran Khan expressed satisfaction over the interest  of leading international investors in Pakistan’s green Eurobond, saying it reflected their confidence in the government and Wapda.

He praised Wapda for the fast pace of construction of dams, which he said was vital to produce clean energy for a green environment and save the coming generations. The prime minister said the “decade of dams” project, initiated in 2018 should have been worked up five decades ago to ensure water security.

“Ten dams to be built in the next 10 years will produce 10,000 megawatt clean electricity. It is a step towards thinking about our next generations,” he emphasized.

He stressed long-term planning instead of a short-term election-to-election approach to carry out development projects in the country. He regretted that Pakistan’s short-term planning in electricity generation resulted in the highest per unit rate of the commodity compared with the rest of the countries in South Asia. Imran Khan said clean energy production supplemented by the 10 Billion Tree project would help overcome impacts of climate change and rising levels of pollution in big cities. The establishment of 15 new national parks, recharging the wetlands and growing dense mangroves are the government’s effective steps to counter global warming, he added.

The prime minister touched upon other areas where the government was focused to bring a change including uniform academic syllabus, health card scheme, controlling mother and child mortality rate, and reforms for agriculture and livestock.

He said Diamer Bhasha and Mohmand Dams were critical for meeting the country’s water requirements, adding that the launch of bonds would help increase the funding for water reservoirs.

Chairman Wapda Lt Gen (retired) Muzammil Hussain said launch of the debut Green Eurobond by Wapda was a major achievement wherein a parastatal organization accessed the international bond market on its own credentials without any financial obligation on the government. He mentioned that top investment banking company JP Morgan showed interest in Pakistan’s project after 25 years, and added that the bond enhanced the country’s economic profile.

According to a report by Wapda, the Reg S (Regulation S) 10-year dollar-denominated green bond has been launched at a very competitive price of 7.5 per cent, which is unprecedented given Pakistan’s sovereign bond maturing in 2031 has a coupon of 7.375pc.

“This will go a long way in diversifying the funding sources for undertaking huge capital-intensive projects,” reads the report.

The report further states that there was a tremendous appetite for Wapda’s Indus bond with the order book oversubscribed six times reaching close to $3bn. This included credible and top companies, including Goldman Sachs, Blackrock, Bluebay, Fidelity, Ashmore, Amundi and UBS.

“It is a gold-plated transaction and Wapda appointed top [international] banks led by JP Morgan, who have come back to Pakistan after a hiatus. The co-book runners included Deutsche and Standard Chartered with HBL as co-Manager,” the report said.