State of SMEs in Pakistan 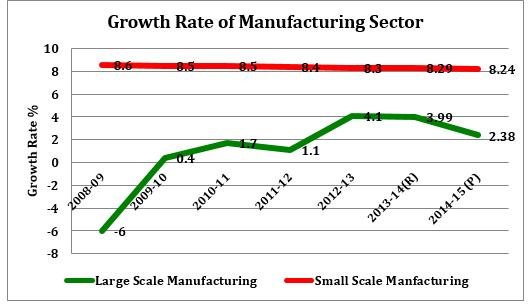 SMEs play key role in reshaping national growth strategies, employment generation and social cohesion by improving standard of living of most vulnerable segment of the society. In most countries, SMEs constitute more than 90% of all enterprises and significantly contribute towards economic growth. SMEs contribute to development in multiple ways; creating employment for an expanding labor force, providing much needed flexibility and innovation in the economy and contributing to value addition in GDP. In Pakistan, around 99% of economic establishments are SMEs that collectively contribute 40% to GDP and 26% to the exports from manufacturing sector.  Sectoral contribution of industrial, agriculture and services sector to GDP and industrial classification of SME sector in Pakistan are given as below:

During the last 5 years the average growth rate of the manufacturing sector has been 2.9% per annum.  However, The small enterprises outperform large enterprises and provide support not only to overall manufacturing sector growth but also to the overall GDP growth. Access to finance, state of the art infrastructure technology & skill up- gradation and limited integration in global value chain are some issue faced by industrial sector in Pakistan.

The small enterprises outperform large enterprises and provide support not only to overall manufacturing sector growth but also to the overall GDP growth.  Therefore, over the past few years SMEs have figured prominently on Government’s development agenda in pursuit of the aims of SME-led GDP growth, enhancing SMEs share in global exports and employment generation.

In Pakistan, SMEs hold great potential to change the economic landscape of the country. Unfortunately, these SMEs suffer from a variety of weaknesses, which have constrained their ability to take full advantage of rapidly changing global business environment. According to the Doing Business Report 2016, trading across boarders, getting electricity, paying taxes and contract enforcement are the most problematic factors influencing business environment of the country. 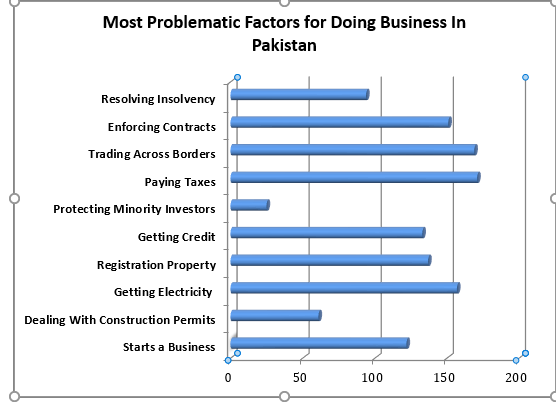 In Pakistan, evaluating SMEs performance to design future SME development strategy remains a tenuous task for policy makers, due to informality of the sector, absence of unanimous SME definition and lack of data availability on SMEs. According to estimates  91.3 % of SMEs operate as sole proprietorships and are not registered, and therefore it is difficult to monitor their performance and devise policies for their long term uplift. 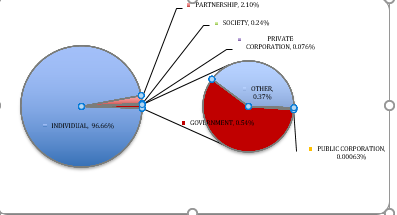 The Census of Establishments 2005  provides the basis for statistical analysis of the sector. As evident from the graph, 94.46% economic establishments have an employment size of 1-5. Due to their sheer numbers, size and nature of operations, this segment of the economy promotes endogenous sources of growth and strengthens the infrastructure for accelerated economic expansion and development. It also implies that “subsistence” businesses provide income generating activities to the majority of the populace.

It is interesting to note that 96.66% of economic establishments fall in the category of sole proprietorships while only 2.10% are partnerships and 0.076% private corporations. This again alludes to the fact that while there is an entrepreneurial consciousness in the country, its manifestation so far has been mostly in the form of subsistence businesses. Hence there is a need to exploit the untapped potential in order to promote greater entrepreneurship among educated youth.

Concentration of bulk of SMEs in the owner-managed category is also indicative of the extent of informality in the economy. Given the self-limiting constraints of the informal sector, one can easily fathom why our industrial sector has lagged behind compared to other developing countries over the years. Encouraging documentation through voluntary/incentivized schemes needs to be considered seriously by the policy makers, so as to encourage graduation from informal to formal.

SME sector in Pakistan is the engine of economic growth and plays an important role in employment generation and poverty alleviation. Besides job creation, it significantly contributes towards achieving balanced growth across regions. However, most of the small enterprises remain at the rudimentary stage of development and thus fail to graduate as medium enterprises due to low level of productivity and competitiveness. Among other constraints faced by the sector, informality of SME sector limits its growth and development; as most Pakistani firms operate on the fringes of the corporate sector. Among the many challenges that SMEs face, integrating into global supply chains, and achieving competitiveness requires gearing up and continuously introducing and implementing changes in controls, systems and procedures. Corporatization is an important step for building this strong internal system, that not only streamlines internal processes, but is also beneficial to the firm in obtaining business development support and availing services from the public and private sectors, for growth and development.

A country’s performance is gauged upon a few key statistics – its GDP, trade balance (exports & imports, poverty index etc. In fact economists have devised various measures to assess different aspects of development in a country. Exports of any country largely signify the product mix being produced in the country, its competiveness in the global market and provide interesting insights into the structure of the economy. Pakistan’s exports heavily concentrates on agriculture, textiles and clothing hence contains three fourth of total exports. As given in figure:2 textile manufacturers contain  around 54% of total exports in 2009-10 followed by 17% of food & agriculture group while the contribution of other sector such as carpet, sports goods, surgical industry, leather products and engineering goods remained low

Pakistan’s exports by destination is also highly concentrated to EU(28), followed by the United States, China, Afghanistan and UAE. During the period, various policy measures have been taken to diversify exports markets and enhancing regional trade. However, the situation in 2014-15 remained almost analogous to 2009-2010 except the nominal increase in exports to Chine and UK.

As a result of GSP Plus, Pakistan’s exports to EU Countries have increased from US$ 5.31 billion in 2009 to US$ 7.5 billion in 2014 that represent around 40% increase. Most of EU 28 countries are included in others category.

Building upon Pakistan’s natural endowments, has somehow, remained a challenge. Despite having a coastal line of 1,120 kilometer and favorable conditions for shrimp farming, our exports of fish products is only US$ 318 million. This is mostly due to use of banned nets, poor compliance to SPS & HACCAP, absence of adequate fishing boats and poor facility at fish harbor. A potential opportunity for capitalizing on the potential of the fisheries sector, is therefore, lost.

Similarly, shifting to mechanization, from hand-stitched footballs and use of composite material in sports goods has stopped growth of sports goods sector in Pakistan. Sectors like carpets, footwear, furniture, marble, handicrafts etc. are not too encouraging. The only sectors, which have showed robust growth in last decade, are fruits, vegetables and meat.  Since these sector largely constitute the SMEs, huge growth potential exists. According to SMEDA estimates, adopting a sectoral approach, while prioritizing interventions for SME export promotion in 13 high growth sectors, it is envisaged that Pakistan’s exports can be increased by US$ 36 billion. The 13 high priority sectors that can enhance Pakistan’s exports through interventions across the value chain are:

Pakistan faces numerous challenges. Among other issues, the law & order situation, coupled with an energy crises in many parts of the country since 2000 onwards has had a significant impact on our industrial sector. This has not only had a significant negative impact on foreign investment in the country, bust has also stalled local investment. Shortage of key infrastructure, rising prices, is increasing production cost. Limited focus on workers’ skill development, poor machinery maintenance and mindset of businesses towards engaging relevant experts, lack of planning, particularly sustaining growth is also making our products less competitive in the international markets. Additionally small exporters are of the view that most polices only favor big exporters, which discourages small and new exporters to tap into export markets.

The recently gained GSP Plus Status from the EU provides an opportunity to Pakistan’s exports in general, and textile industry in particular. This opportunity for textile and others sectors of Pakistan is available for a period of 10 years, conditionally upon fulfilling requirements to implement 27 conventions covering environment, anti-terrorism, anti-narcotics, human rights and labor rights. The GSP Plus will help in retaining and increasing our textile exports, however Pakistan should not only rely on this particular sector. Besides controlling law & order issues, we must plan and implement energy generation plans, gas import projects, skill enhancement of works & managerial staff, compliance with HSE, SPS, HACCP and friendly policy environment for manufacturers as well as exporters. Increasing exports and rebuilding a resilient economy is only possible through the joint efforts of the public and private sectors.