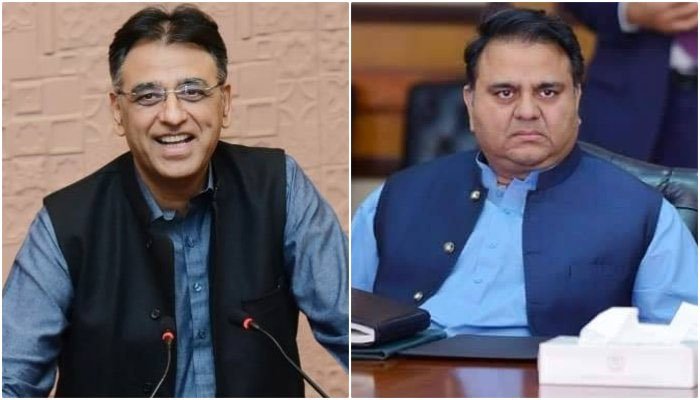 ISLAMABAD: Putting up a fierce defence to the estimated GDP growth rate, Minister for Planning, Development and Special Initiatives Asad Umar on Tuesday said that the growth rate of 3.94 percent predicted by the National Accounts Committee (NAC) for the outgoing fiscal year was based on real figures and data.
The figure was not fudged and should not be made controversial as it was calculated on the month-wise data of various macro-economic indicators, including foreign remittances, exports, Large Scale Manufacturing (LSM), agriculture, and services sectors compiled by the Pakistan Bureau of Statistics (PBS) and State Bank of Pakistan for the last 10 months, he added.
Addressing a press briefing flanked by Minister for Information and Broadcasting Chaudhry Fawad Hussain, Asad Umar said the Federal Cabinet today reviewed the GDP growth rate figure and expressed satisfaction over the government’s economic performance. He said the projections of the International Monetary Fund (IMF) and World Bank could not always be true. Pakistan’s economy shrank by 0.5 percent in the last financial year (2019-20), contrary to the two lending bodies’ projection of 1.5 to 2 percent, he cited.
The minister said the credit for better economic performance went to Prime Minister Imran Khan as he had decided not to impose complete lockdown at the outbreak of COVID-19 pandemic to save the low-income workers, including daily wagers from hunger. “Due to timely action of maintaining a balance between saving the people from COVID-19 pandemic and hunger, the world acknowledged that Pakistan has managed comparatively better as compared to the other countries,” he added.
The minister said during the COVID-19, a program was started under which every third household received cash relief, which ultimately revolved in the market that helped boost the economic activities. Similarly, he said, the prime minister himself led the overall scenario to tackle the situation as he himself met with the IMF chief and took initiatives in that regard. He said so far in the current fiscal year, the remittances had jumped by 29 percent as the country received US$ 5.4 billion more as compared to the same period of last year.
Likewise, he said in the agriculture sector, wheat, rice, and maize production witnessed the highest production in the country’s history while sugarcane also recorded bumper crop. He said when there were bumper crops, the people had more money to spend, and it was evident that overall cash circulation in the market at present had increased considerably. The LSM sector, he said, was also growing by over 9 percent. The LSM and agriculture sectors jointly contributed 40 percent of the total GDP, he added.
Asad Umar said the construction sector had boosted the services sector as the sale of cement had increased by 70 percent. Similarly, he added, the private sector borrowing had also risen by 60 percent or Rs 126 billion, which indicated that the private sector investment in the country had increased.
It all showed that the country’s economy had performed well, which had perturbed all the opponents of PTI, particularly the opposition parties, he added.
CABINET DECISION
Information Minister Fawad Chaudhry told the press conference that the cabinet had approved a proscription review committee to decide the ban on the TLP. He said the proscribed party sought a review on the ban decision. Also, the cabinet welcomed the improvement of relations between Turkey and Saudi Arabia, he said, adding: “We believe that a reduction of grievances among Muslim ummah will bring stability in the world and we support it.” He said the government was waiting for the Election Commission of Pakistan (ECP) to take action on how its social media pages were misused.
Chaudhry also disclosed that the cabinet approved a “special visa process” for Chinese citizens working on China-Pakistan Economic Corridor (CPEC) projects or those who wanted to invest in the country. “Pakistani missions in China will provide a two-year work entry visa to Chinese citizens for CPEC [projects] within 48 hours. Security clearance will be given within 30 days. Separate immigration counters will be established on the line of the green channel for CPEC business visa holders,” he shared.”[For] work/business visas, a separate subcategory of CPEC visas will be established. Similarly, in China, separate desks will be established at Pakistani missions for considering CPEC visas,” he added.