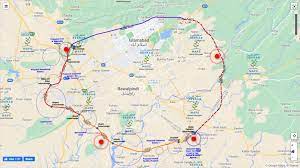 Real estate dealers got away with deals worth Rs 130 billion in the last four years showing the clients the connectivity of their residential societies with the infamous Rawalpindi Ring Road project.

Prime Minister Imran Khan has recently ordered an inquiry into the scam, which, according to officials, involves 18 individuals with political backgrounds and 34 real estate tycoons. They managed to buy or acquire 64,000 kanals altogether in the jurisdiction of the Rawalpindi/Attock loop, Paswal Zigzag, GT Road, and Islamabad Margalla Avenue.

The scam, under which the route of the Rawalpindi Ring Road was changed and expended, has triggered inquiries by the National Accountability Bureau (NAB), the Federal Investigation Agency (FIA), and the Anti-Corruption Establishment (ACE).

The buyers were made to believe that the value of the land was to multiply once work on the Rawalpindi Ring Road project started.

An examination of official records, files, and initial findings of investigators linked with the project found that these 52 individuals, either directly or through frontmen, collectively acquired over 63,828 kanals of land by paying an estimated Rs31 billion to the real owners. Some portions of the lands were allegedly grabbed in the last four years.

Dealers, according to the report, published in The News, have also yet to pay tax against 67% of the land deals, and similarly, 60% of societies and builders kept on working and minting money from buyers despite not meeting the basic registration criteria.

According to the report, 18 housing society owners bought over 11,300 kanals in nine mauzas, such as Moorat, Jungle, Raman, Ganda, Daulat Pur, Mehlu, Bango, Kanial and Qutbal. These mauzas are connected to the Attock Loop.

These builders and property tycoons paid around Rs1 billion to the original owners of the land but they themselves generated over Rs11 billion from clients by hiking the land price in the last two years.

In the cunning schemes of the real estate barons, the real landowners got only peanuts.

According to the newspaper report, 10 housing societies paid only Rs 3 billion altogether to the owners of 24,540 kanals but they generated Rs 50 billion through selling files. Similarly, another six housing societies acquired 10,871 kanals and made around Rs 35 billion near the New Islamabad International Airport, GT Road, Paswal Zigzag and Margalla Avenue.

Almost 60% of societies and builders are selling ownership titles of land in bulk through advertisements by showing the proximity of the society with the Rawalpindi Ring Road project.

The land affairs are not without litigation. It is learned that land cases by 309 individuals and 11 firms in different civil courts.

Different anti-corruption departments, such as the FIA, NAB, and the ACE are looking into the affairs of the Rawalpindi Ring Road project beneficiaries.

These influential beneficiaries got alignment approved for favourable road links. One such alignment favoured 34 plots of a former government person in Sectors C-15/16, Islamabad; also, the prices of 1,310 kanals land situated in the surroundings of Attock went up due to the ring road linkage.

The other beneficiaries include a former PML-N senator, two PPP MNAs, two federal ministers, a PML-N MNA, six PTI MPAs and many others.