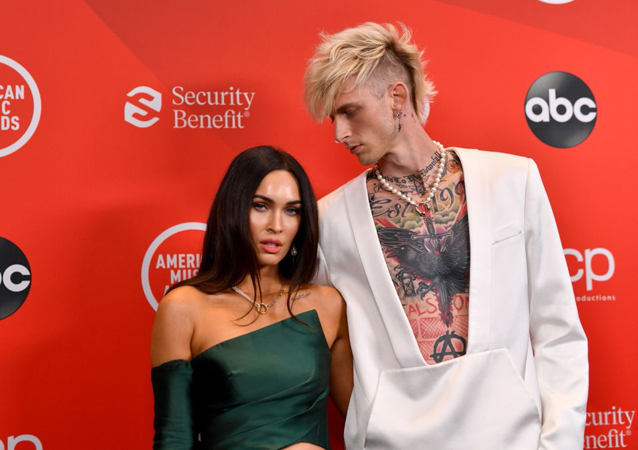 Machine Gun Kelly gave fans a glimpse into his weekend in New York City for Saturday Night Live — and let’s just say, he partied like a rockstar. Kelly, born Colson Baker, was the musical guest, so naturally he popped champagne with good friend and SNL star, Pete Davidson, ahead of time. (That may or may not be why they fell off the stage.) There was some cake smashing at the after party, too, while Megan Fox was along for the wild ride. The Transformers star accompanied her twin flame to rehearsals and the big show as he shared several cozy photos with his girlfriend from the trip.

But Fox doesn’t appear to be wearing any sort of engagement ring.

The couple sparked engagement rumors last week when she stepped out with what appeared to be a diamond sparkler on her left hand. However, the actress seemingly responded to speculation by sharing a pic of a ring on that finger that said: “F*** you.”

That doesn’t mean a proposal is far off, though. A source told E! News, Fox is “very serious with MGK and sees him as her soulmate and life partner.”

“They plan to be together forever,” the insider adds of the Midnight in the Switchgrass co-stars. However, Fox is still legally married to Brian Austin Green.

The Beverly Hills, 90210 actor and Fox share three children — Journey, 4, Bodhi, 6, and Noah, 8 — and are currently working through their divorce. Although they separated one year ago, the Jennifer’s Body star didn’t officially file until November.

“She wants the divorce to be done with so she can move on and move ahead,” the source told E! News.