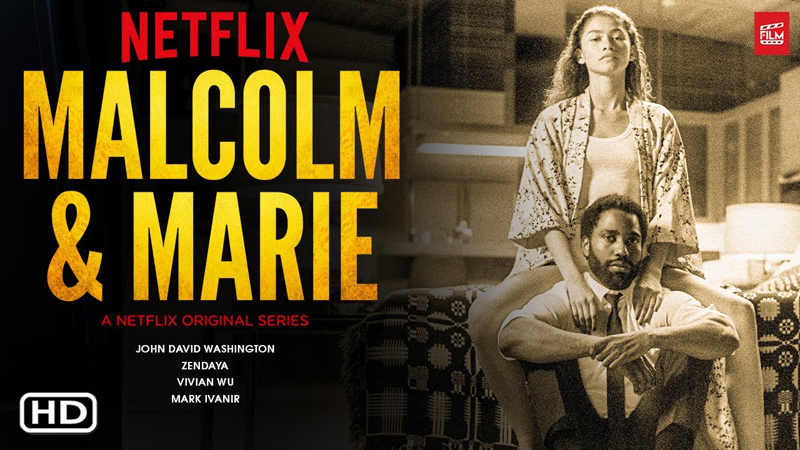 In the opening scene of “Eyes Wide Shut,” Stanley Kubrick introduces the married couple played by then-married couple Tom Cruise and Nicole Kidman via a 60-second Steadicam shot. The pair are getting ready for a formal event. Cruise wears a tuxedo, Kidman a gown. The camera follows him around their New York apartment, entering the master bathroom, where she sits on the toilet, door ajar. Kidman stands, she wipes and they go on with their preparations, this unglamorous everyday gesture speaking volumes about the comfort this husband and wife feel around one another.

Two decades later, Sam Levinson has written and directed a movie about a different couple, “Malcolm &amp; Marie,” and while his project isn’t nearly as ambitious as “Eyes Wide Shut” in theme or technique, it feels every bit as raw and honest in exploring the fissures in a relationship with a bit of wear on its tires. Not too shabby for a film dashed off and shot during the pandemic.

Now, I can’t say whether Levinson was thinking of Kubrick with the movie’s opening, but the chances are good, considering how film-literate Levinson is (the son of “Diner” director Barry Levinson, Sam is the visionary behind HBO’s “Euphoria”). He understands that an on-camera bathroom break signifies “realism,” even if authenticity is just an act.

Shot in beautiful high-contrast black and white — on actual 16mm Kodak stock — by “Euphoria” DP Marcell Rev, “Malcolm &amp; Marie” opens at the other end of a swanky soiree. Instead of getting ready, Malcolm (John David Washington) and Marie (Zendaya) have come home from the premiere of his latest feature. She heads straight for the bathroom, leaving the door open behind her. The camera is polite enough to remain outside, but gazes in as she adjusts her pantyhose and does her business.

This is not a common sight in cinema, nor is it handled in a vulgar way. The inclusion could hardly have been a casual decision on the director’s part, and yet, it serves to establish an immediate sense of familiarity between the audience and these characters. Levinson understands that acknowledging the call of nature on-camera signifies authenticity, even if such “realism” is just an act, suspended in air quotes. That dance between exhibition and self-examination lies at the heart of “Malcolm &amp; Marie.”

Virtually everything that takes place over the next 100-odd minutes reflects a similar level of intimacy, as if Levinson is permitting us to share something incredibly private with this couple.

It’s “the biggest night of my life,” Malcolm believes, and we observe as they alternately appreciate and abuse one another, making love and war as they test and tentatively reestablish where they stand. , and Levinson has been extremely clever in folding the exposition we need into their argument. As they parry, Malcolm and Marie tell us who they are, how they met and what they expect for this relationship to survive.

From the moment they arrive at the designer beach house the production has provided, Malcolm is worked up, but it’s easily apparent that Marie’s not on the same wavelength. She stands just outside the door, coolly smoking a cigarette, while he paces the living room, recapping the night, anticipating the reviews that will come in a few hours. “The white guy from Variety liked it,” he says, feeling vindicated because those who’ve been cruel to him in the past were lining up at the premiere to congratulate him.

It’s Variety policy for its critics not to tip their hand as to their reaction before a review runs — but no matter. The point of Malcolm’s monolog is that he’s a Black filmmaker whose work is routinely judged by white people, and he’s bothered that these pundits insist on imposing a racial (though he uses the word “political”) dimension on everything people of color create. It’s a fair point, especially true of late, as critics go beyond the call to evaluate, using their reviews to signify their own woke-ness. But is this of interest to the average moviegoer? Or to Marie, for that matter?

She’s heard it all before, reminding her boyfriend that his next film is an Angela Davis biopic, which might explain the Spike Lee comparisons. Malcolm wants to know why a movie can’t simply be a movie when Black artists are involved. (Levinson is not Black, which adds yet another level to the self-aware movie’s already meta sense of representation.)