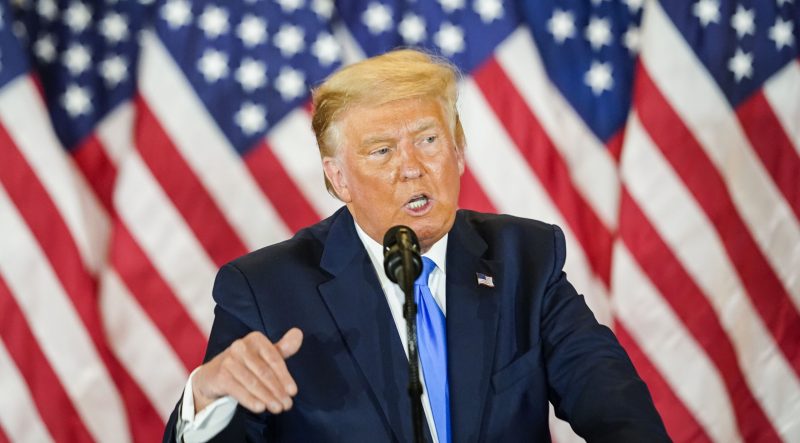 Election Night 2020Friends, family and advisors to Donald Trump have been bitterly complaining that Twitter’s ban of the president after his supporters stormed the US Capitol amounts to an assault on free speech by radical leftists.

Ironically, given the enormous influence of the platform, they have aired their grievances first of all on … Twitter — a choice underscoring the platform’s huge readership and the relative paucity of alternatives.

Asked Rudy Giuliani, the president’s personal lawyer, “Who will be silenced next?”

And Mike Pompeo — posting not as secretary of state but on his personal account — tweeted: “Sadly, this isn’t a new tactic of the Left. They’ve worked to silence opposing voices for years.”

For influential Republican senator Ted Cruz, the decisions by Twitter and some other social media were “absurd & profoundly dangerous.”

“Why,” he went on, “should a handful of Silicon Valley billionaires have a monopoly on political speech?”

Every one of the above messages was posted on Twitter, the social network that for years has been Trump’s preferred means of communicating with the public — and sometimes even with other world leaders.

But on Friday, amid widespread fury after he encouraged the supporters who forced their way into the US Capitol in a bloody and chaotic melee, Twitter banned him permanently.

It was taking the rare measure, it said, “due to the risk of further incitement of violence.”

Reddit, a news and discussion website that is normally fairly permissive, on Friday closed a forum popular with Trump fans, saying it was inciting hate.

The question now is where Trump and his supporters will turn next.

Donald Trump Jr., himself fearing exclusion from Twitter, has asked his followers to send him their email contacts — hardly the most reactive form of communications — so he can keep them abreast of news.

In a quickly deleted tweet, the president himself on Friday spoke of creating his own platform “in the near future,” without providing any detail.

Gab saw “record traffic” on Friday night and Saturday, according to its creator Andrew Torba, and had to add computer servers to handle it.

Launched in 2016, Gab positions itself as a platform promoting “freedom of expression” but has become known above all for its far-right — even neo-Nazi — user base.

In 2018, when an assault on a Pittsburgh synagogue claimed 11 lives, investigators discovered earlier anti-Semitic posts by the shooter on Gab.

Several companies have banned Gab, including PayPal, Visa and the Apple and Google app stores.

Parler faced more severe consequences: after it, too, was banned first by Google and Apple in their app stores, Amazon confirmed it was suspending the social network from its cloud computing services, effectively pushing it offline.

All three tech giants said Parler, which briefly became the top free app in the Apple store Saturday before it was removed, had failed to tackle violent content on its platform.

Given the riot at the Capitol this week, there was a “serious risk that this type of content will further incite violence,” Amazon said in a letter to Parler first reported by Buzzfeed.

Once the preferred platform of the far-right fringe, Parler — launched in 2018 — now draws more traditional conservative voices, like those of Fox News star and close Trump ally Sean Hannity, as well as the Republican governor of South Dakota, Kristi Noem.