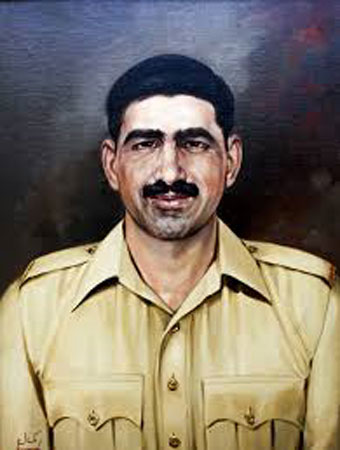 Major Shabbir Sharif Shaheed, recipient of Nishan-e-Haider was remembered on Thursday on his 49th martyrdom anniversary.

Pakistan Army has paid a rich tribute to Sawar Hussain , saying “his fearless actions and indomitable courage inflicted heavy losses to the enemy.”

Born on 18 June 1949, Sawar Hussain was the first foot soldier of Pakistan army to receive Nishan-e-Haider after his martyrdom.

Belonging from the area of Gujjar Khan in Rawalpindi, he joined Pakistan army as a driver on September 3, 1966 at a very young age of 17 years.

Despite being a driver Sawar Hussain Shaheed participated in 1971 war actively and supplied ammunition to army men under intense shelling and direct fire from enemy tanks and infantry.

After fighting valiantly for five days, he was hit by machine-gun fire on the front lines while preventing the enemy soldiers from lying down minefield to target Pakistani side. He received martyrdom at the young age of 22 on this day in 1971.

After Sawar Hussain’s martyrdom his village Dhok Pir Bakhsh was renammed as Dhok Muhammad Hussain Janjua to commemorate his sacrifice.