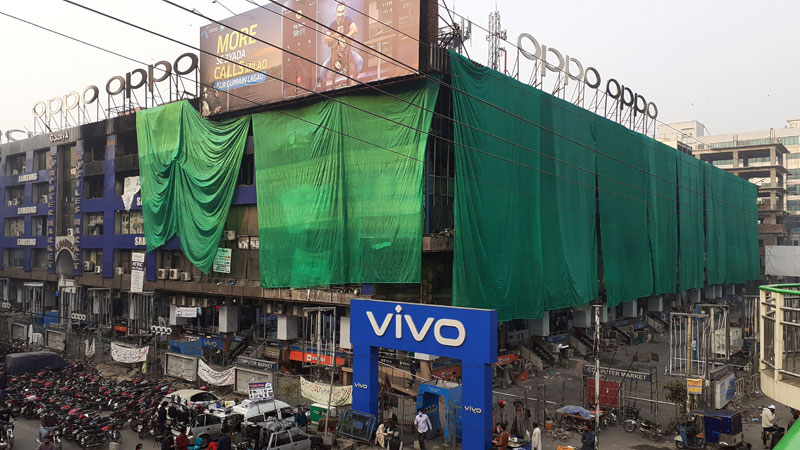 Hundreds of lives have been put at risk by the partial re-opening of Hafeez Centre, which was shut down after a massive fire badly damaged the plaza’s physical structure on October 18, especially since no repair or maintenance work has been carried out since then.

A Daily Times investigation has revealed that the decision to open the ground floor and basement of the Centre was taken in haste and without conducting necessary safety measures to check the integrity of the building, which raises serious questions about the safety of shopkeepers as well as visitors.

The Plaza remained completely shut down for 45 days after the October fire damaged as much as 40 percent of its infrastructure.

The fire erupted on October 18 and caused losses worth hundreds of millions of rupees to shopkeepers and traders. It started from the second floor of the plaza and moved upwards while damaging other floors very severely as well.

Hafeez Centre is a famous commercial market of the city and hosts more than one thousand shops in the five-storey building. Situated in Gulberg area, Hafeez Centre is the hub of businesses of mobile phones, laptops, computers, UPS, batteries and other accessories related to electronics. Thousands of people visit the plaza on a daily basis.

“We spent the last one and a half month in severe trauma because of the closure of business here,” said Malik Adnan, who has a mobile shop at the ground floor of the plaza.

While looking at the cracks on the upper wall of his shop due to the fire, he admitted that he opened his business while putting his life in risk.

“Our businesses were already affected due to COVID-19 and then the fire forced us to stay at home even longer. So, we were left with no option except to open our shops now even putting our lives in danger,” he said, clearly frustrated at the state of affairs.

He added that the government and the traders’ union of Hafeez Center did nothing in the renovation of his shop that was partially damaged. We didn’t fire our workers from their jobs even when the plaza was closed and my loss is estimated at around 1 million rupees now, he said. He also said that no renovation work was done during the last 45 days and they were still unable to witness any measure taken to avoid such tragic incidents in the future. It was also observed that some shopkeepers were selling their items in their vehicles outside the plaza because their shops were not fit for business anymore. Muhammad Javaid, who established his ‘shop’ of laptop accessories in his mobile vehicle outside the plaza, said his shop is at the second floor that is not opened yet and therefore he decided to set up his car as a mobile ‘shop’.

“We didn’t get even a single penny from the government during our testing times despite the fact that we were affected very badly,” he said dejectedly. “To earn money is the basic need of life and that is why we are here even in a high risk environment just because of our families and children.

The severity of the fire can be gauged by the fact that the shopkeepers were literally crying while also praying to God on that tragic day. Few of them also started reciting Azans for seeking mercy while seeing the magnitude of the fire.

There were very few customers seen at Hafeez Centre as most of them preferred to buy items from the nearby plazas or from the vendors with ‘mobile shops’ outside the plaza.

A committee was constituted by the Chief Minister Usman Buzdar after the incident to estimate the loss of the shopkeepers and to assess the building whether it is fit for further use or not but its report wasn’t made public raising several questions. Some insiders are of the view that the fire was so massive and huge that the steel used in the construction of the plaza was melted badly while weakening the structure also and it is no more fit for business activity. The fire also caused some explosions in the building due to the compressors of Air Conditioners, UPS batteries and other such detonating material and it continued for almost 24 hours that shows that the steel of building was melted badly. They further said that the building is opened due to the pressure of the shopkeepers and any further untoward incident cannot be ruled out.