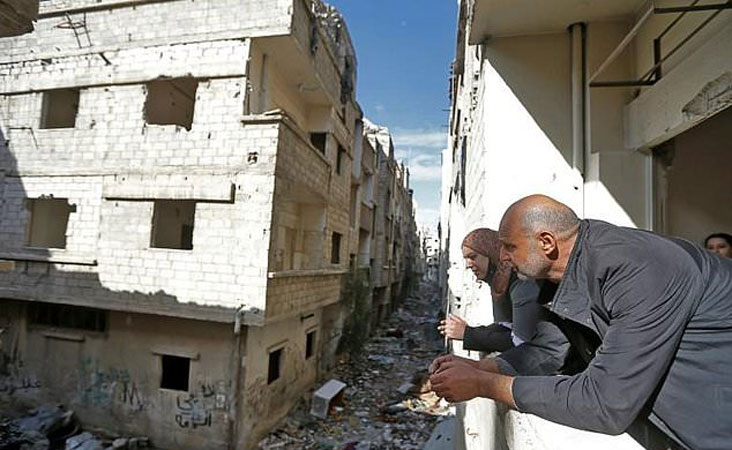 When Syrian authorities said they would allow returns to the war-ravaged Yarmuk camp for Palestinian refugees in southern Damascus, Issa al-Loubani rushed to sign up and quickly started repairing his home.

Hundreds of former residents have already requested permission to go back to the settlement, home to 160,000 Palestinian refugees and some Syrian families before the conflict broke out in 2011.

More than 400 families have returned in the last few months because they cannot afford to rent homes elsewhere after years of displacement, the United Nations said in early November.

Loubani, who first left in 2012, is determined to join their ranks even if the windows of his wrecked apartment are still covered with plastic sheeting. “Our flat needs major work, but it’s better than paying rent,” said Loubani, who has been living in a Damascus apartment with his wife and daughter.

“We still need electricity, running water, and to clear rubble from the streets” before moving back in, the 48-year-old Palestinian refugee told AFP from Yarmuk.

Syrian government and allied forces retook the camp in 2018 from the Islamic State group. But two years on, reconstruction has been slow and the scars of war remain visible. The walls of Loubani’s building are pockmarked with bullet holes.

Neighbouring blocks have had their facades blown off or seen their balconies cave.

Some structures have collapsed entirely following years of bombardment and heavy fighting.

Loubani’s wife, Ilham, finds an old photo from their wedding in the rubble-strewn alley.

“That’s Umm Walid,” she says, pointing to one of the guests in the picture.

Founded in 1957 with tents for Palestinians who fled or were ousted from their homes with the establishment of Israel, Yarmuk grew into a bustling neighbourhood. In 2012, around 140,000 residents fled as clashes raged.

Those who stayed faced severe shortages of food and medicine under a withering years-long government siege.

IS entered the area in 2015, bringing further suffering to remaining residents until jihadists were forced out three years later.

This month, the Damascus municipality said residents could register to return to Yarmuk if their homes were structurally sound. Some 600 families have already signed up, said Mahmoud al-Khaled, a Palestinian who heads a committee that clears rubble in the camp.

But the civil engineer who grew up in Yarmuk said less than half of the buildings were currently safe for reoccupation. The 430 families that have already returned despite difficult living conditions rely heavily on the UN agency for Palestinian refugees (UNRWA).

Around 75 percent of UNRWA’s 23 premises in Yarmuk, including 16 schools, need to be completely rebuilt, and all three of its health centres have been destroyed.

To compensate, the organisation sends a mobile health clinic to the camp once a week and provides buses to transport children to schools in Damascus.

A month ago, Syrian Shehab al-Din Blidi returned to his home — one of the few apartments in Yarmuk largely spared by the fighting. Its cosy living room with bright paint and upholstered armchairs stands in stark contrast with the wasteland outside.

“If we had waited for electricity, water and sewage to return, we would have perhaps” had to wait for a year before coming back, Blidi said. With little outside help, he said it was up to residents to fend for themselves.

“Reconstruction requires efforts from several countries,” Blidi said. “In the meantime, we have to make do.” The 60-year-old has managed to secure some electricity for his flat through a long cable connected to a power source beyond the camp. With no running water, he buys large bottles from outside Yarmuk and stores them at home. But for camp residents displaced to Idlib — the last major opposition bastion, in northwestern Syria — returning is nearly impossible.

“No one in the (opposition-held) north can register to return or even reach Yarmuk,” said Ahmad Khormandi, who left the camp when IS entered in 2015.